I find that my substitution for certain ingredients in recipes is more of an act of forgetfulness as opposed to being culinary adventurous. Many a time I have planned supper in my mind based on what my body craves, have arrived home after work and realised I have only the handful of ingredients I needed to make it happen. While knowledge will allow you to react accordingly, as somebody who has a keen interest in food and equipped with a fearless disposition in a Kitchen, I can do this reaction for you and present you with a bulgur wheat pilaf.

Before you overreact, I know you’re thinking ‘What average person has bulgur wheat in their pantry but not rice?’ and I do agree. But in this instance, I had genuinely run out of rice and had a small handful of dry bulgur wheat left in the cupboard as leftovers from a recipe I was testing for an upcoming collaboration. Not a common household situation, admittedly, but there we are.

Rice dishes can be somewhat of an enigma to those not in the know. Is it a risotto? Is it a paella? Is it a pilaf? While the principle of the rice dish may seem almost identical, the construction of these dishes are completely different and the difference in their method do ultimately have a significant effect on the final dish. In this instance, where I was looking to combine warmth, heat and chewy nuggets of texture – a pilaf fit the bill better than any other due to its loose and fluffy texture where the rice granules are flavoured prior to cooking. This is contrast to perhaps a risotto where the aim is to get the dish almost soupy and saucy, where the sauce holds the majority of the flavour.

This is where bulgur wheat is a fantastic – and shame on me for saying, nearly better! – substitute for rice. Pilaf is all about flavouring the rice, and as bulgur wheat already comes with an almost nutty flavour, you’re adding flavour to an ingredient that would initially only be used for vehicle and texture. So this wins on all accounts, technically! 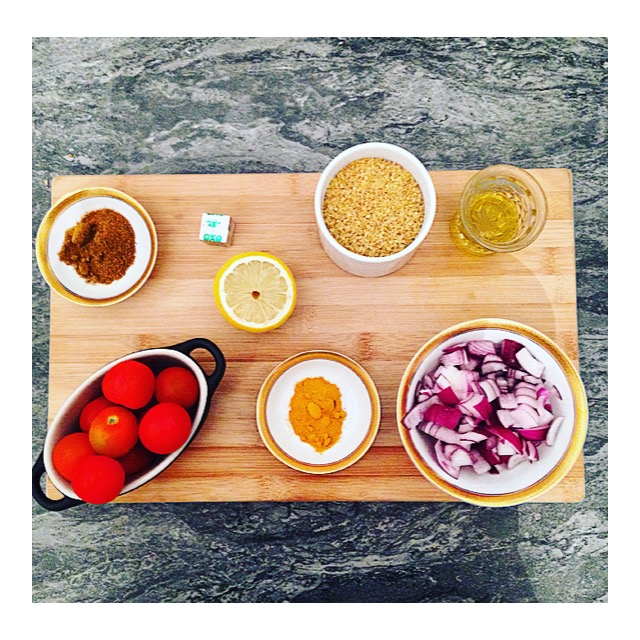 In a wide, deep frying pan (that comes with a lid), heat up a little garlic oil and butter together to create a foamy consistency then add some roughly chopped red onion. Once softened, scatter in some cumin. Pour in the bulgur wheat (maybe about a cup and a half?) and mix everything together to coat the grains. Add some turmeric to this (please Jesus use a little spoon – that stuff will stain you to a Simpson with no regret!) and mix again to coat everything and add salt.

Slice up some cherry tomatoes (as liberally as you want) and add to the pan before pouring in three cups of vegetable stock. Stir ONCE, the point of pilaf is that it’s not stirred like a risotto, and bring to a boil. Drop the heat to a gentle simmer before placing a lid on the pan and leaving it for about 10 to 15 minutes before uncovering and fluffing up with a fork. Serve with a squeeze of lemon if the mood takes you.

I mean, naturally if you want to do this with rice, please do so but I feel that the bulgur wheat adds it own nutty flavour properties that I can’t really recreate with rice. I haven’t cooked a pilaf with rice since coming to terms with a bulgur wheat pilaf and I’m sure you will commit the same infidelity too. I also only just realised this recipe happens to be vegetarian dish too. Bulgur wheat substitute? Vegetarian food? What have I become? I promise I’ll be back to my normal self for the next post.