I cooked with coconut oil. Don’t throw stones at me. I had absolutely no idea what came over me and it was a momentary lapse of judgement. My mother had bought me a huge jar of coconut oil as a stocking filler for Christmas and while I had never really understood why there was such a fuss for it, I was very happy to have it gleaming at me with all of its silky silver splendour from my pantry but never really knew what I was going to do with it.

One Saturday, whilst being governed by domestic chores and the ritual of deciding what I would wear that night, I really fancied something small and in a ‘to-go’ style so I could bird pick at it whilst still going about my day. I felt a rice pot would fit the bill perfectly and I would incorporate all bits and bobs I had but then I saw it. There it was. Staring at me. The jar of coconut oil. Teasing me. Inviting me into a world I never saw use in being a part of.

And as I scraped the surface of the marshmallow coloured paste I had no idea where this recipe would lead me. Ultimately what I know now is that it lead me somewhere delicious and not only do I thoroughly recommend this recipe, I now recommend everybody purchases a jar of coconut oil for when they want their savoury dish to be rooted into something sweet.

This recipe – while sweet being the core principle of flavour base – also has some throat catching warmth courtesy of the ginger. I opted for dried chili flakes as opposed to fresh as I wanted to keep the aesthetic of the pot relatively consistent and I fell adding reds to the already prominent oranges, yellows and purples would not hit me right. I stand by my choices. 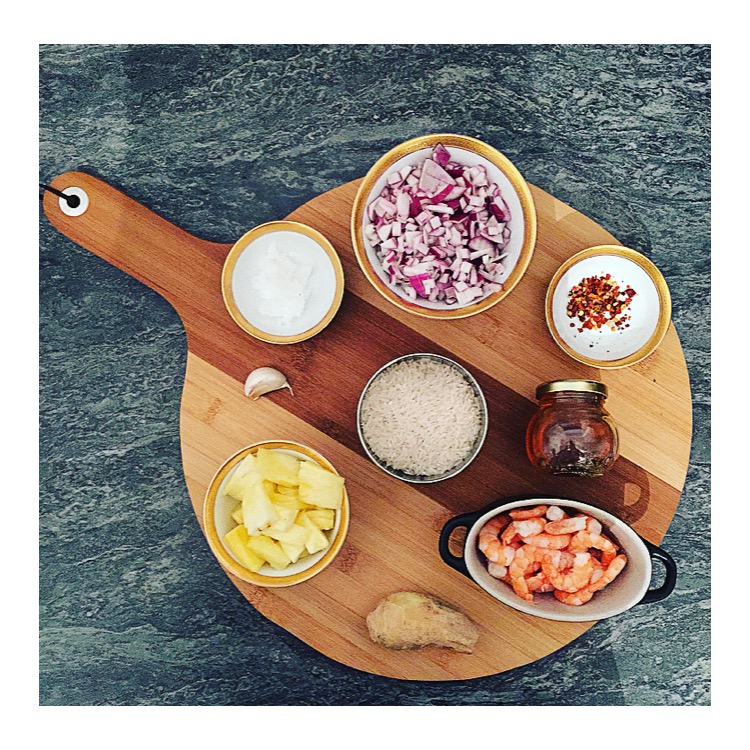 Firstly, cook some plain white rice as per packet instruction. Now – this is a very lazy step I have given you because I am in no position to tell somebody how to boil rice. It’s a bone of contention in my gastronomic experiences that I still cannot master, and that is how to flawlessly boil some rice. So I’ll let your packet of choice dictate your method but suffice to say, you’ll need some cooked rice. Once cooked, leave to one side to cool slightly.

In a wok (or big pan – but woks really are fantastic for the purpose of cooking anything) melt a little coconut oil. To this add some finely chopped red onion and add salt before sweating out. Tap in a few chili flakes and grate in some garlic before turning everything with your spoon to coat the onions. Grate in a little fresh ginger (peel it with a teaspoon, it’s so easy) and cook for a further 1-2 minutes.

Add the cooked rice and stir everything to combine before adding some chopped pineapple chunks before tossing in some precooked king prawns. The kind you get from a supermarket that are already pink are absolutely fine by me. However if you are cooking with raw prawns, add these before the rice. Finally, pour in a very small amount of honey and stir everything once more to combine. Dollop into a small pot and garnish with some freshly chopped coriander to serve. 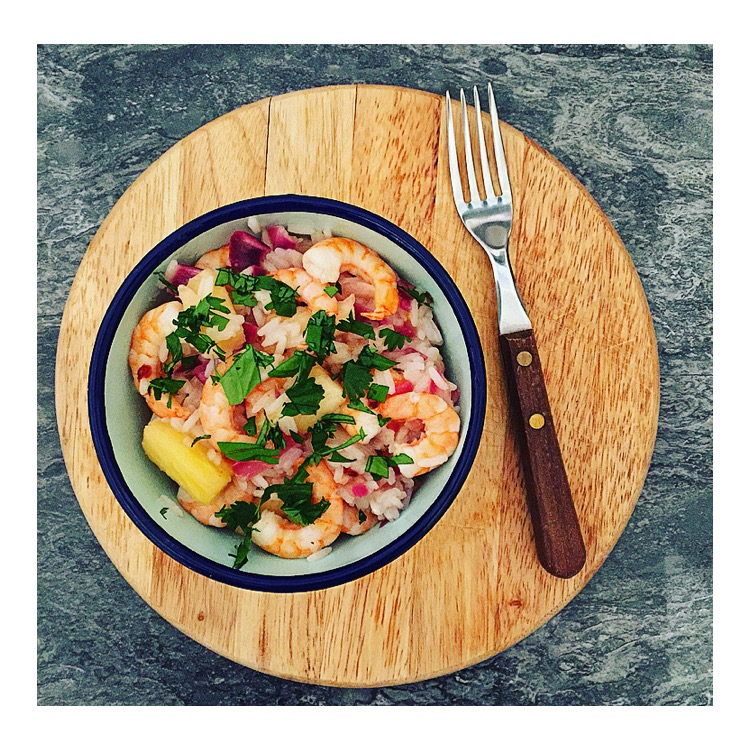 I’d like to note that my choice of serving this in a little pot was purely so that I had something that could fit in my hand so that I could walk around my apartment with and take out on to the balcony with me while I put out laundry. Of course this can be served on a plate, I’m not entirely insane, and however no one can deny the temptation of a rice pot.

Furthermore, please accept this recipe as my conforming to a trend. I wanted no part in the coconut-oil-in-everything nonsense and thought it was best placed in the pantries of posers. I do apologise. There, I said. I’ll be doing a recipe for a damn quinoa salad next, you watch…

…. although if I ever do, please seek medical help for me as a matter of urgency.