I always thought the concept of ‘cutesie’ version of normal recipes were pointless. You see them all the time online where an everyday recipe is condensed down and done in a way that looks extremely tempting but you would never want to dedicate the time to accomplish. They’re good for a quick ‘Share’ on Facebook but I have yet to meet somebody that has actually incorporated the recipe into their everyday lives which in turn, in my opinion, makes the concept redundant. But again, in what has become somewhat of a trend lately, I had to go back on my word.

I clocked a video on Facebook where a cake was cooked in a mug. Now I know this really isn’t an entirely original concept as I know cooking entire meals in mugs has been around for quite some time (I’m sure Jack Monroe has many a recipe done in a microwave). I think I always turned a blind eye to the craze because it eliminates the part of food that I enjoy, which is the actual cooking of it. This is why I don’t buy soup makers, slow cookers and bread makers and all that nonsense because it makes the process of cooking redundant and that’s where I find my enjoyment.

However, baking is not my strong point. At all. I very much struggle when it comes to combining flour with anything, if I’m honest, as flour and I have somewhat of a tempestuous relationship and a failed cake has often seen the bottom of my bin. So when I really analysed the idea of a mug cake, I realised that it was actually a very simple way of satisfying my ‘baked goods’ craving whilst not testing my nerve or really denting my pantry.

I think the most appealing part of the entire process was that even if it did go belly up and had to see the walls of my garbage, I wouldn’t be wasting a whole lot of ingredients so I wouldn’t feel any type of way about it. In this light, for somebody like me, a mug cake was perfect. I toyed with a few different recipes while I was testing and a whole bunch of different flavour types and at one point I actually ran out of mugs and my friend who was helping me out admittedly had to drink tea from a very small tin mug I had that was not microwave appropriate.

I landed on this lemon and thyme recipe, which was perfect in all of its sweet yet refreshing bite that slightly reminded me of a lemon drizzle cake. This recipe also comes in handy when you are really struggling for ingredients. We’ve all been there when we don’t have enough of one thing to make it work but still we need cake. Well this recipe is deep rooted in the ‘let them eat cake’ philosophy, even if it does come in a mug. 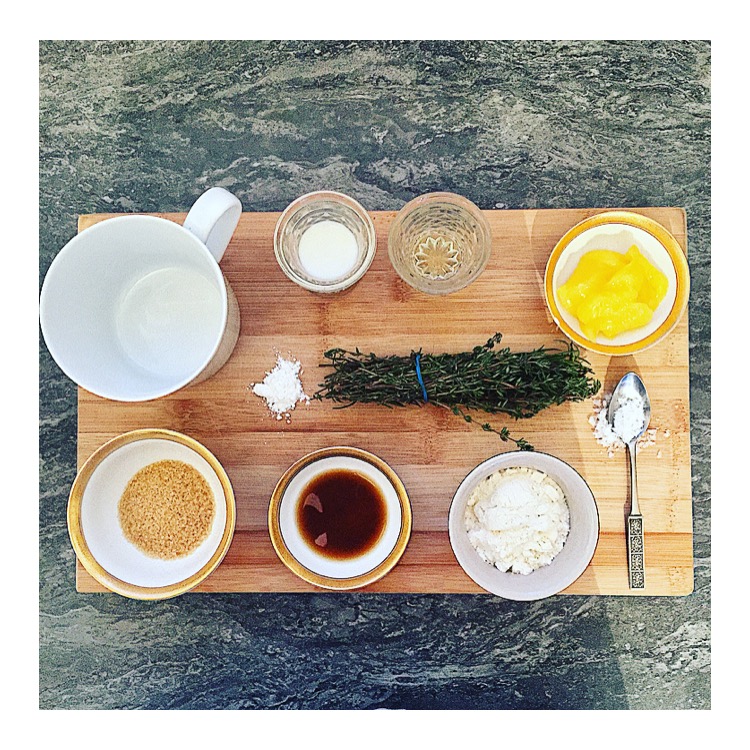 Grab the biggest mug you have. Add two tablespoons of good lemon curd and one tablespoon of flavourless oil. To this, add two tablespoons of full fat milk and a tiny splash of vanilla extract – although I would recommend going down the pod route, splitting it and scraping out the seeds but if time is of essence, as much cake emergencies are, then go for the extract.

Now add 5 tablespoons of plain flour, one tablespoon of white sugar, a quarter of a teaspoon of baking powder and a light sprinkle of some sea salt. Run your fingertips down a few thyme strands so that the tiny leaves drop into the mug. Don’t used dry thyme as it will not work well in this recipe. Finally, grate over some lemon zest before giving everything a generous mix up with a fork so that a smooth-ish and fragrant batter has formed.

Place this into a microwave on the highest setting for one minute before checking the surface for springiness. If it does not spring up, place in for a further 10 seconds or so until a slight crust has formed. Take this as a hint that it’s done and serve alongside some cream.

The inside texture of a mug cake is not that of sponginess like a baked cake so don’t prepare for that. The intense heat and cooking mechanism of this gives the mug cake a lovely penetrable crust but at the same time a much dewier and soft inside so it’s not specifically a ‘cake’ but nonetheless, it hits that craving exactly where you need it too.