These peas are extremely superficial and I make no apologies for them. Essentially they are exactly what you think they are, and that’s Mushy Peas. But there’s nothing sexy about the term Mushy Peas and to be honest, the crafting of these peas is a little prettier than that you would get from a brightly coloured can or served in a Styrofoam cup, therefore I have anointed these a Smooth Pea Puree. I have my reasons.

I always order mushy peas from a chip shop. Admittedly, it is very rare that I crave chips from the takeaway, but when I am hoodwinked or under the influence of others (and by others I mean alcohol) my standard order from the chippy is always the same thing – chips, battered sausage and mushy peas. Now, in keeping with the last blog post where I showed you how to attain some crunchy No Fuss Oven Chips, I also wanted to share with you my recipe for mushy peas to accompany them, as in standard British tradition, there’s nothing worse than a dry chip.

The first time I encountered homemade mushy peas was with my mother. She served us salmon one evening when I was maybe 17 or 18 and I watched her tumble a wobbling landslide of peas into a big bowl followed by some mint and butter. She then snatched up her hand processor, flipped a switch and blitzed everything into a swirling, neon coloured puree. I was bewildered and had no idea why the peas needed to yield so much attention but I ignored it anyway. The peas were fantastic. Smooth, creamy, sweet and still tasting of what they are supposed to – peas!

Often times with store bought mushy peas, so much doctoring goes on in order to attain the texture that in the process they lose the foundation which is the herbal sweetness of the pea itself. But when done at home, you are able to crack open the pea and release its flavour whilst combining it with a real flavoursome trinity that will lift anything it accompanies.

And yes I use frozen peas here. You know it’s so much easier than the other kind so let’s go for it. Just don’t use tinned. Tinned peas taste like tuna, for some reason?

Fill a small pan with water and bring to a boil. Add to the pan some crushed garlic (crushed garlic is just garlic gloves that you’ve squeezed down on with the blunt side of a knife) along with a handful or so of frozen peas. Once this returns to the boil, allow to bubble for 3 minutes until tender. Remove the garlic carefully before draining the peas. Hold the peas under cold running water to ensure they stop cooking and also to retain the bright green colour. That colour really is amazing, though.

In the bowl of a food processor, toss in your cold peas. Add a spoonful or so of crème fraiche and grate in a little lemon zest and a slight squeeze of the juice. Tear up some coriander and drop into the bowl. Finally grate in a small amount of parmesan before blitzing everything to a chunky puree. It will look like a brighter guacamole but this really isn’t a bad thing.

Taste the peas. The parmesan cheese has its own milk saltiness however if you feel you want to boost some more flavour, sprinkle in some sea salt. Once you have reached your desired flavour balance, remove the peas from the processor and add to a small pan to reheat when you are ready to serve. 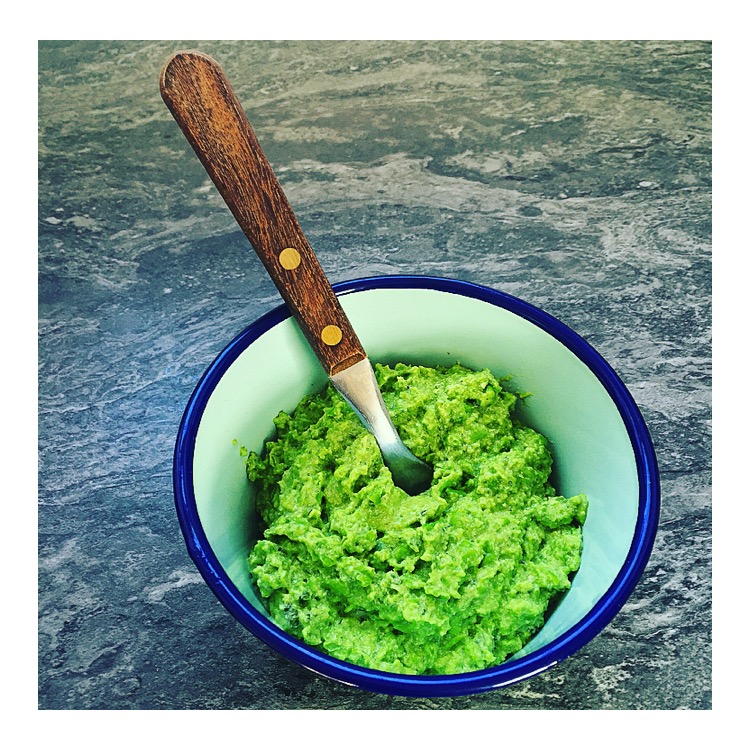 And there we have it. They are my favourite accompaniment to chips and when that sweet salty puree slathers on that chip, while it takes me to an absolute food dream world, it also reminds me that there is nothing better than a good old British tradition of a baked carbohydrate slathered in something moist. And that’s the bare bones of what we’re trying to achieve here.

Furthermore, this recipe is so, so permissive. You can be as my mum would do and instead of the crème fraiche and coriander, you could substitute for some butter and fresh mint leaves. The only thing that stays constant with me is the frozen peas. They’re so useful.

And we all have a random bag of frozen peas stashed away in the depths of our deep freeze for an impromptu twisted ankle or head bump, so in the name of touching wood and assuming you’re not accident prone, you may as well put them to some good use.