Words mean things. As basic as this sentence opener may seem, it is true when I say that words mean things. People just throw around words these days because they think certain words fit the bill. And while I understand it, I don’t support it. What I mean but this nonsensical rambling here is that food writers, food bloggers, food Instagrammers, people online with food in general often use words for the sake of justifying simplicity.

For example, I get knots in my stomach when I see somebody refer to something as being ‘pan fried’. Well… of course its pan fried. Anything in a pan is fried. It’s the equivalent of saying you had a water bath or that the car is petrol drove. One would assume that if something is fried, said frying happened in a pan. On the same ticket, I struggle with the term ‘blackened’. Oh it’s ‘blackened’ steak. It’s ‘blackened’ salmon. Is it ‘blackened’ or did you just burn parts of it? Speak truthfully and you shall be set free.

However, I say all this to say, there is one word that I use myself for justification of simplicity and I beg somebody to genuinely offer me an alternative. This word is ‘summer’. When people say ‘oh it’s a summer salad’ or ‘oh, it’s a summer stew’ I am always left bewitched, bothered and bewildered as to how on Earth you can anoint something as being a ‘summer’ dish when it includes absolutely no seasonal ingredients. The only thing summer about it, is that it was eaten during a summer month. And that’s all folks.

But I am a criminal in this offence. This is my ‘Summer Curry’. The only reason I use the term ‘Summer Curry’ however is because it’s bright yellow in colour and uses coconut as a base flavour so it has this tropical beach property to it. That what I felt allowed me a certain liberty to call it a Summer Curry. Please forgive me.

This was my happy medium. A curry I could put together on a sweltering hot summer’s day that did not require me to be hunched over a hob for too long but in taste and texture, was still as aromatic and spicy as an average curry but had enough creamy lightness to it that it could be eaten on the balcony without much heat disturbance.

Heat a little olive oil in a large pan (big enough to hold the curry later on) and gently sweat a finely chopped onion. Side note – if you have coconut oil, that would be even better to use in place of olive oil. I would also add a little sea salt to the onion to prevent it browning. Once beginning to soften, grate in a garlic clove. Slice a chili down the middle and remove the seeds before roughly chopping and throwing into the onion and garlic.

Using your knife, press down on a lemon grass stalk until it splits before chopping the thicker end finely and adding to the pan. Using the same grater you used for the garlic, grate in a little lime zest. Sprinkle in a small amount of desiccated coconut and small pinch of turmeric mixed with a little curry powder, turning with a spoon so that the pan’s contents turns a golden yellow.

Pour in a can of coconut milk and bring to a boil. Squeeze in the juice of the lime before adding a pinch more turmeric. Bring to a boil and then drop to a simmer, allowing the curry to bubble gently for roughly 15-20 minutes. Add a handful of ready cooked king prawns, a handful of mangetout and a further light sprinkling of the coconut. Allow everything to simmer for a further 5-10 minutes so the prawns and mangetout are warmed through. 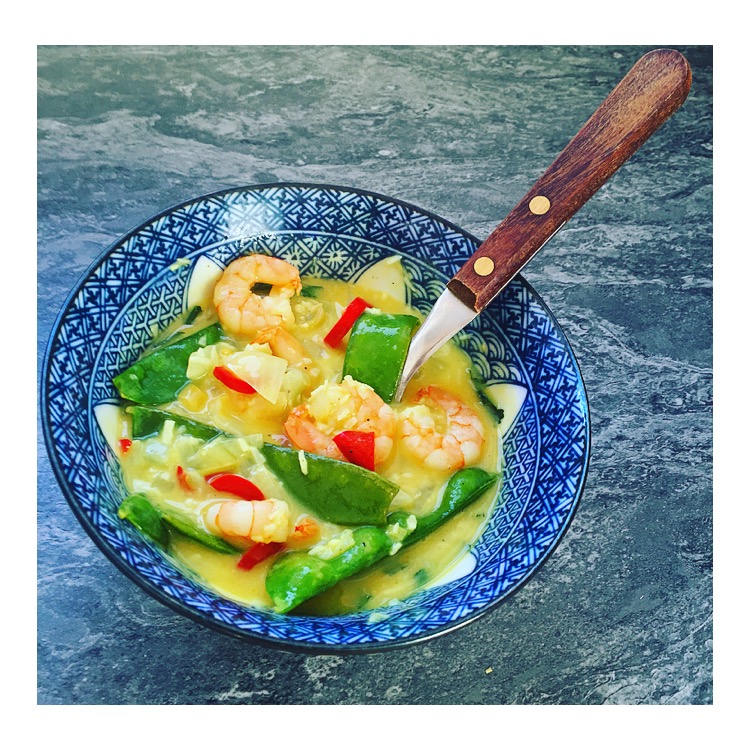 Serve with some plain rice and a little sprinkling of fresh coriander if the mood takes you. However I’m not going to lie – I ate this without only a spoon and a cold beer as its accompaniments and I was in my element, but do as you wish.

I threw this recipe together for a friend when I was absolutely craving the texture and creamy consistency of a curry but the weather was – for once – way too hot to be slopped over a bowl of heart, spicy curry. I was in a summer catch 22. A pan fried catch 22.