Skip to content
Broccoli & Blue Cheese Guacamole.
I have no idea when I became the kind of person that messed with the sanctity of guacamole but suffice to say it happened quickly. It was out of my control. I saw a white rabbit and I just had to follow it. It was also the result of having numerous fridge items that needed using up, but that’s neither here nor there. But the journey of getting from separate ingredients to the thick, silky green texture of this ‘type’ of guacamole felt bizarre… but in a totally rewarding way.
I always thought that tainting the core principles of a guacamole was sacrilegious. Time after time I’d see hipsters and urban ‘foodies’ upload their take on a guacamole it used to make me madder than a wet hen. I’ve seen guacamole that incorporates chocolate. I’ve seen guacamole that incorporates potato and I have even seen guacamole that incorporates spinach and cauliflower… with no avocado. Cut to my eyebrow on the ceiling.
I could never understand how people could call something a guacamole when it didn’t contain an avocado. It’s the main principle of the damn dip. It’s like saying you’re making a carrot and coriander soup but you’re using parsnip and parsley. So it’s absolutely NOT a guacamole, it’s a cauliflower dip. But guacamole and avocado is click bait, I get it – but don’t lie. Why lie? The lies are dangerous.
So despite my raging ‘LEAVE GUACAMOLE ALONE!’ campaign, I find myself here. With a broccoli and blue cheese guacamole. Don’t throw avocado stones at me because I am still digging my feet firmly into the foundation of what a traditional guacamole is supposed to be, and this dip still stands faithful to the rules. There’s still heat, there’s still a sour liquid and more than anything, the avocado is only enhanced by new ingredients, not replaced!
This guacamole is strong. Not in a bad way, but in a hefty, throaty, ‘makes-you-want-to-have-another-dip’ kind of way and that is never a bad thing. It’s velvety smooth but has that thwack of strong blue cheese right at the bottom note so you will definitely be wanting some more. I would go easy on the salt however, due to the strong and punchy flavours. For this reason, I recommend serving this up along with some toasted pitas or some plain tortilla chips. A painfully cold beer would also be a good shout, but not essential.

Cut a head of broccoli into its little floret-tree things and bring a pan of water to a boil. Add the broccoli and cook for about 4 or 5 minutes before draining and running under cold water to keep tender and meadow green.
In a food processor, add a small splash of vegetable oil followed by a little dollop of coconut oil. The coconut oil isn’t 100% essential but it does bring a mellow sweet note to the base along with the cheese just to even all the flavours. To this add the broccoli, a roughly chopped spring onion, the juice of one lime, a few generous chunks of your favourite blue cheese and a little throw of salt.
I like my guacamole with a kick so I add a roughly chopped chili but if you only want to tickle your throat, take the seeds out before adding (do this but slicing the chili in half and running a teaspoon down the core – watch your eyes for wayward seeds!). Close the processor and blitz for only a few seconds. Now core your avocado (split around the middle, twist, remove the big pip) and spoon in the fleshy avocado meat.
The reason this is done separately is because you want the avocado chunks to be prominent in this as opposed to everything being a pureed, blitzed cream – like those God awful ones found in supermarket multipacks. Throw in a handful of fresh coriander before pressing the button gently for 2 seconds to allow everything to come together.
If you like your guacamole creamier, by all means run the motor on the processor for longer. If you like it smooth by chunky then use this method here. However if you want yours SUPER chunky, don’t bother with a food processor and mix everything by hand in a big bowl. Just to show off I tend to toast up some pistachio nuts to throw on top of this but some pumpkin seeds would also be fine. To be honest it’s absolutely fine on its own, but I loves a show off when I can. 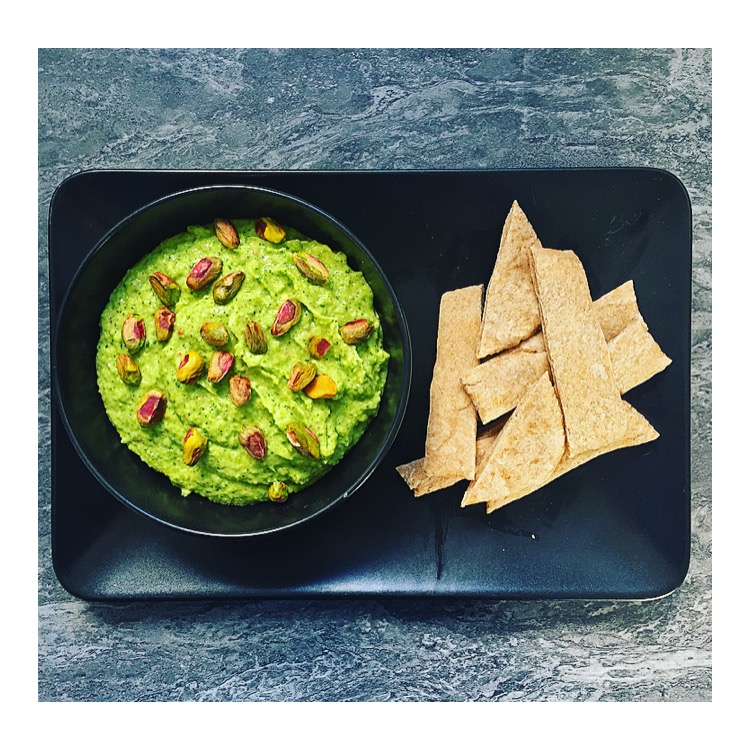 So essentially what I’m saying here is forgive me avocado father, for I have tampered with your legacy. But this tampering has concluded in a beautiful, buttery velvet like guacamole dip that makes use of some ingredients that I have lying around. I’ve said before on this blog that substitution is nothing to cower away from in a Kitchen. So long as the avocado and a citrus is there, you have licence to call it a guacamole. Anything else is NOT a guacamole.
You hear me hipsters? It is NOT guacamole and it NEVER will be.