My freezer is a morgue. On any given day, if you open up my fridge you will find pale pink chicken carcasses just lying about in zip lock bags. I hate waste and I don’t have the nerve to start throwing things away. My mother has drilled in to me for years both the economical but also the flavour benefits you get from buying whole chickens, carving them into sections, bagging them individually and freezing them as oppose to buying multi packs of individual cuts.

Now, separate the leg into a ‘drumstick’ and a ‘thigh’ by putting the leg skin side down and finding the ridge between the drumstick and the thigh and cutting them downwards until separated. Often times I omit this part and keep the thigh as one piece however I always find it useful to separate them as it makes the individual bagging process a lot more specific.

Now separate the breast. Personally, I’m not the biggest fan of the breast and opt for a thigh, but it has its purpose in the Kitchen. To get the breast, locate the hard spine bone and then lightly dragging the tip of the blade down each side and peeling back the skin. Make a deep incision each side of the bone, slicing into the meat and downwards, therefore separating the breast from the carcass.

As for the wings, pull them back from the carcass to expose the seam that connects them to the breast. Once visible, cut down through the bone joint that connects them and pull hard to separate it. By this point, if cutting one whole chicken, you should have 8 cuts of chicken – two thighs, two drumsticks, two breasts and two wings. This is a procedure that, albeit sounding brutal, is thoroughly recommend. It completely eliminates the pressure of pre-preparation and ensures that you are able to sensibly gage what cuts of meat you have available at any given time of the week.

Which brings me to the golden broth of this blog post. Believe me when I say the method is almost criminal because you are doing nothing except boiling ingredients to within an inch of their existence and draining them. However I must say, it’s a beautifully warm, sweet soup with a real salty punch that is perfect for a Sunday. I also recommend getting yourself some bread to plunge into the golden depths of this soup. You won’t regret it. 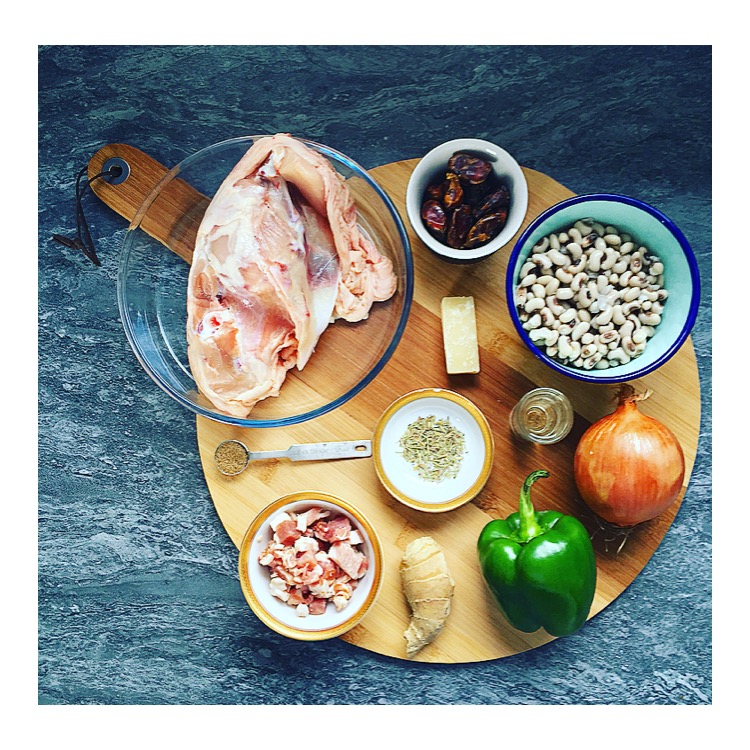 Find your biggest pan. Melt a little butter in the pan and add a roughly chopped onion, sprinkling with a little celery salt. If you don’t have celery salt, sea salt will be fine. Add a deseeded and roughly chopped green pepper and turn with a spoon. Note – use any colour you want to be honest though, I only had a green pepper left. Take a handful of dates and throw them in, but put a few aside for the bacon later. Finally for this part, add the chicken carcass to the pan of frying vegetables.

Now fill the pan with enough water to cover the chicken carcass and bring the water to a boil. Once the water comes to a boil, drop it to a slight simmer before adding a little sea salt. Get yourself a thumb side piece of ginger and remove the rough skin (use a teaspoon to scrape it off, it’s so much easier) and drop it in the pan. I say, now that the heat is on low, leave this for a good two hours and just plod about your usual day and allow the simmering heat of the water to drag out every piece of flavour from the ingredients.

Once the 2 hours is up, here comes the straining. This to me is the most fun part but as a disclaimer, I must say that you need to be careful as you are handling hot liquids here. Get yourself a big sieve or a strainer and place paper towel into it and place over another big pan. This is to absorb any fat or oils that has come from the butter and chicken in the pan. Gently pour the soup mixture into the strainer. You may need to change the paper towel once or twice but it’s no big manoeuvre.

Eventually what you will be left with is an empty pan of soggy ingredients and a chicken carcass, so feel free to dispose. With the pan of newly strained, beautiful broth, pop this back on the heat and tumble in a cup or so of black eyed peas and a small dash of white wine (but any alcohol here will do) and allow them to cook softly.

While they bubble gently, this is where you want to melt a little butter into a small frying pan and fry up some lardons. Take the dates from earlier that you put to one side and chop them finely, adding to the frying pan of bacon. Allow the bacon to cook until crispy and absorbing the sweet date juices before removing to a plate and paper towel to dry off – this is where they’ll also turn extra crispy. Ladle the broth into a bowl – along with the hot black eyed peas – followed by a generous spoonful of the fried bacon and dates. I also grate a little Parmesan over the cheese but if you’re a reader of this blog, you’ll know how piggy I am. 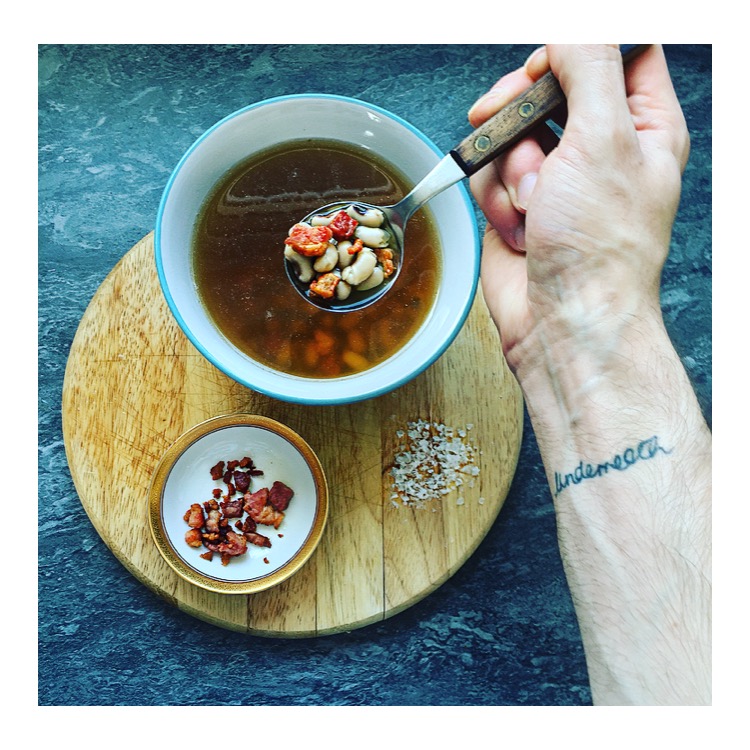 I tend to keep a little bowl of crispy bacon bits to the side of this soup to scatter on to the spoon just before I throw it all into my mouth but you don’t need to be so dexterous to enjoy this. It’s one of those soups I can definitely picture me cooking for 1,000 grandchildren someday who wall want to hear stories of yesteryears. In reality I’ll most likely cook this for myself when I’m hungover and singing to my dog Waffle but that’s neither here nor there.

And I definitely recommend the freezing chicken method. It has saved me on so many occasions and I don’t know about you, but I definitely sleep better at night know that there is a dismembered chicken lying in the depths of my freezer just waiting to become a soup at thawing notice.