‘When it comes to the confines of how I disgustingly consume meat, the limit does not exist…’

Despite the fact that food is one of the single most important components of my life, I am also man enough to admit that sometimes I am busy and have other things to do. Please don’t read this as me saying that I have anything particularly cool, social or rock star-like to do. When I say busy, in the murky depths of my late twenties, it usually means a plethora of washing to do, dusting, dog walking, bed linen putting-onning, hoovering, bill paying, light bulb screwing and all other sort of nonsense that comes with life.

So how do I go through my evening To-Do list and not compromise a fantastic meal? By throwing something in the oven for an hour or so and leaving it the hell alone. I mean yes there are so many recipes I use that are quick and flash but these are often things that are also eaten quickly. I don’t want or deserve that after a night of chores. What I want is that soupy kind of comfort food that I can melt on to my sofa with and eat sloppily and for hours, without thinking I need to rush to get it done. When it comes to eating and chores, it’s always better to eat for hours after than to eat quickly before.

Which brings me to my Baked Bolognese. It’s a one pan, chuck everything into a hot oven and let the heat do the talking. Yes I mean there is the peeling and chopping of an onion and two carrots but we’ve already set ourselves up for some house chores so throwing a vegetable or two into that is not exactly Cinderella work, is it?

Preheat your oven to 180C. Grab an oven proof casserole dish or stock pot – I use my 24cm LEON Cookware collaboration with John Lewis because it heats evenly, is extremely durable and is a dream to look at on your countertop. Grab some foil and wrap around the bottom of the lid and fold around the side (see picture below). This is only so that not steam escapes the pan. We’re not adding water/liquid stock to this Bolognese, and as we’re not doing this on a hob where steam will escape, we need to trap in as much steam as possible. Hence the foil.

Into the casserole dish, pour in a jar of passata along with a can of chopped tomatoes. To this add 2 or 3 roughly chopped fresh tomatoes – just to give it a nice texture. Grate and chop 2 carrots as finely as you can and throw into the pan. Do the same with a red onion. Roughly chop up 2 cloves of garlic and throw into the mix. Get about 500g (a whole packet) of beef mince and crumble into the mixture with your hands.

Now pour in a few drops of Worcestershire sauce along with about a cup of red wine. Grab a beef stock cube and crumble over. To this, add a bay leaf, a good pinch of salt, some fresh black pepper and some dried oregano. Give everything a stir with a spoon before putting on the foil-bottomed lid and shove in the oven for 1.5 – 2 hours. The smell will be incredible, just saying. 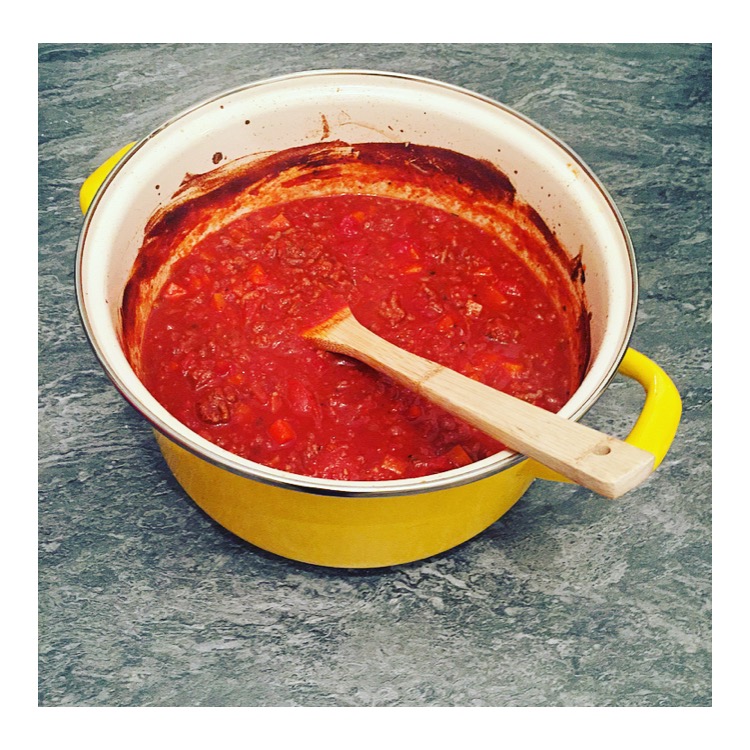 Or you could be disgusting like me and take it in to work the next day and eat it plain as simple, like a ragu, warmed up and eaten straight out of a takeaway box with a spoon like some kind of savoury cereal. When it comes to the confines of how I disgustingly consume meat, the limit does not exist.

CHOCOLATE, ORANGE & PEANUT GRANOLA 🍫🍊
GUACAMOLE & JALAPEÑO SALSA 🥑 🌶
BUFFALO POPCORN 🍿
SAAG ALOO [RECIPE CONTRIBUTION] 💛
TURKISH DELIGHT ETON MESS 💖
Today let’s throw it back all the way to a rooftop party in Havana when you could be in large crowds with wild abandon 🇨🇺
Follow MIKEY AND THE KITCHEN. on WordPress.com