I don’t know about you, but a feeling I can’t fathom in this world is that dreaded feeling you get on your commute to work when you think ‘I’ve forgotten my lunch in the fridge’. Maybe it’s just me and the fact that I base my life around the food I eat, but that stomach curling moment of leaving your work lunch at home is worse than any other.

I hate store-bought work lunches. Not because I’m a snob – far from it – but retailers take lunches and stuff them into a box and keep them in some open air fridge for a few days. The salads are always boring, the noodle dishes never come with enough sauce, the sushi packs are always a let-down and I have a phobia of fridge cold sandwiches. This is why – unless I’m on a working lunch where we eat in a restaurant – I will always bring my own lunch to work.

That’s not to say that I base my evening meal on what I can take into work, but when I make something and it hits me that it would be fantastic reheated in work, I get even more excited. I’m not frugal, but I do then feel as though I made the most of every penny in the pound. The only thing more exciting to me than being able to reheat a dinner for a working lunch, is the concept of a meal which is not only nice to eat cold, but sometimes even better. This recipe is just that.

The noodle recipe here combines my three favourite components to a dish and that is sweet, spicy and salty and the sauce I cannot even take proper credit for because it is using a generous squeeze of that silky acidic Thai ketchup that just lifts every single meal. My fridge is never without a bottle of Sriracha and while I’m happy to use it in the context it was intended, this recipe is one of those ones I can fall back on when I’m struggling.

It’s also the only time you’ll see me use a green pepper, so savour the moment, dear reader. 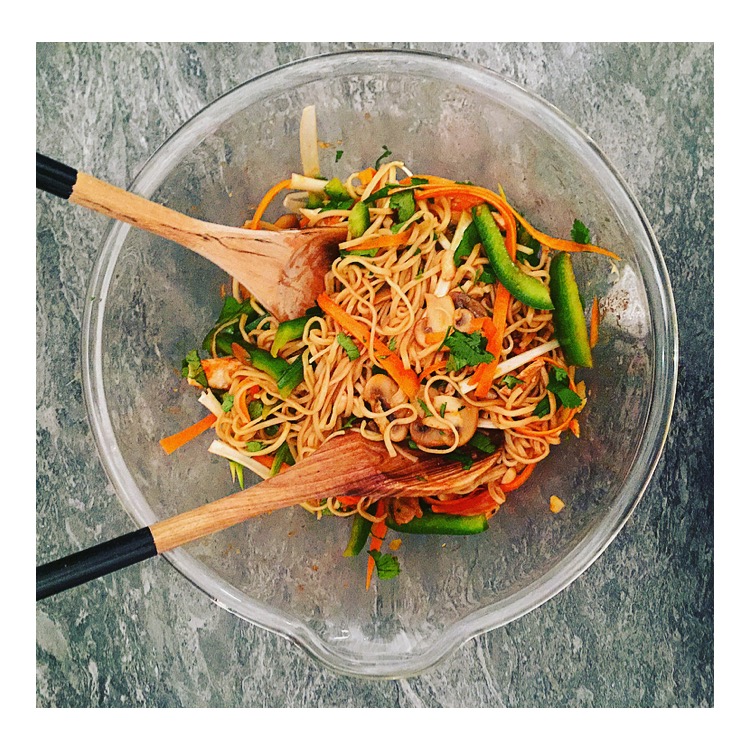 Bring a pan of water to boil and throw in two layers of egg noodles. Cook to packet instruction and once cooked, drain and plunge into a bowl of cold water. This stops the cooking process and eliminates any chance of all the noodles clinging together. In a small frying pan, heat up a little coconut oil before throwing in some lazily chopped mushrooms and cook until soft. Remove from the heat and allow to cool. While the mushrooms and noodles cool, crack on with your vegetables.

The template I used for this particular recipe was one of both premeditation but also just using things I had to hand. I wanted a balance of sweet and spiky so I opted for carrots and green pepper. I sliced them as finely as my mid-evening patience would allow. I found that 1 pepper and 2 carrots was enough to cover me for both dinner and a work lunch. I’d slice thinly lengthways as opposed to chunks so that the shapes marry nicely with the noodles

Drain your cold noodles and throw into your biggest bowl along with the cooled coconut scented mushrooms. Throw into this bowl your finely chopped vegetables. Now on top of this, add your three main flavour components: a shot glass of Sriracha sauce, a teaspoon of runny honey and a generous handful of salted peanuts. Toss them up using two appliances of your choice and serve with a nice throw of fresh coriander.

If you can’t get your hands on Sriracha, look for any Thai hot sauce. Just don’t use a sauce such as Frank’s or God forbid, a Nando’s sauce or something. You want a hot sauce of Eastern culture because it comes with other flavourings that are vital to this recipe such as garlic and sugar without needing to add them. And like I said, before plating up for the evening, definitely put some aside for work the next day. That kick is exactly what you need around midday when you have a report to turn in.