This is the kind of dish you are so thankful for when you have a busy evening.

This is the dish I have thrown together on say, a Friday night when I’ve burst in from work and want something quick, simple and light so that I can burst back out the door to go for drinks with friends. And sometimes when I’ve been clever enough, I’ve made the spice paste beforehand.

Don’t count on that happening too often though.

It’s a good way to use up that gnarled old thumb piece of ginger at the bottom of your fridge but it’s also a fantastic way to use any frozen seafood you’ve got spare in your freezer. Also, I’ve mentioned the stalks of pak choi in this recipe because it gives you that almost bitter take on an onion, but if you don’t want to go to the effort of a pak choi, swap the celery salt in the paste for regular salt and use a celery stick instead of the pak choi.

I’m also somewhat of a dreadful vegetarian these days and have also made a version of this without the seafood and frying some sliced mushrooms along with the pak choi stems. Still gives you a meaty chew against that golden paste. 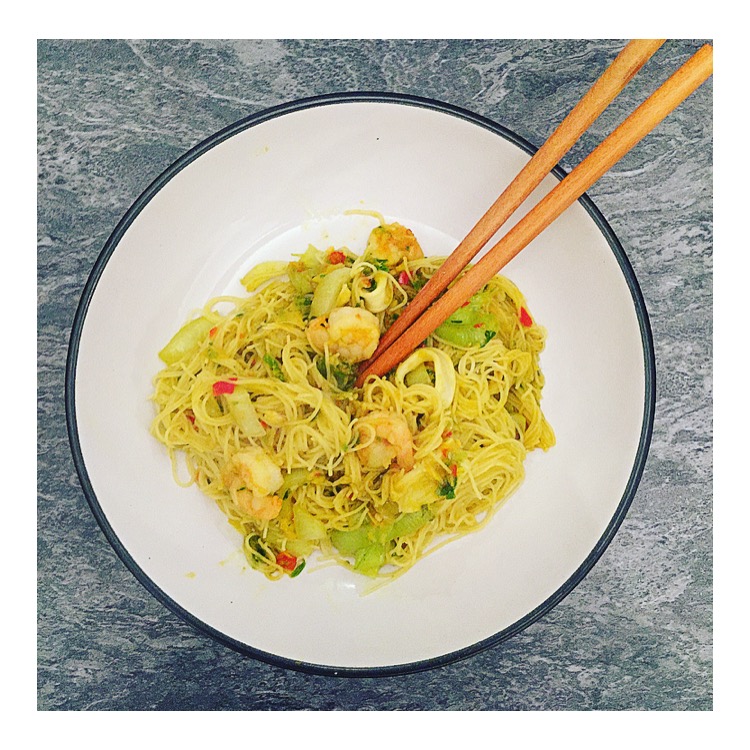 In a food processor, blitz together the following ingredients to make a thick, golden paste: a few slices of fresh ginger (don’t bother to even peel), 2 red chilies, 2 spring onions (thick ends removed), 1 clove of garlic, one teaspoon of turmeric, a small pinch of cinnamon and a pinch of celery salt. Lovely.

Now boil a kettle and put some rice noodles in a bowl. Once boiled, pour the kettle water over the rice noodles and then cover the bowl with a plate. Leave these to soak. Grab yourself a head of pak choi and slice the bottom half into slices (and reserve the big leaves for another dish for another day).

Heat a little coconut oil in a big wok and once melted, tip in your pak choi stems and twirl about in the oil. Now add your fragrant yellow paste and cook for about 3 minutes. Now add a handful of defrosted seafood mix (or just some cooked prawns if you don’t want the squid bits). Cook for another 2 or 3 minutes, constantly stirring everything rapidly.

Now remove the plate from your bowl of rice noodles and drain before throwing into the wok. Mix this up so that the noodles take on the glossy yellow paste and become coated in the spices. Plate up, grab chopsticks and chow down.