What an ugly desert.

But believe me when I say, this is absolutely delicious and has saved me so many times. Because you’re stuffing a banana, you can’t actually get that much chocolate into it so it’s almost necessary for you to be sparing. It’s one of the healthiest desert I can think of that isn’t just a piece of fruit and a prayer.

More than that, it doesn’t even feel like a desert. I’m from the school of ‘If It’s Not Exactly, Then It Isn’t’, i.e. if it’s not a desert, then don’t try and make it one, but this recipe is to the contrary. It genuinely doesn’t feel like you’re eating a baked banana. It’s slathered in so much yumminess it feels like an entire desert.

It’s an absolute breeze to make and the result is so creamy and tasty, the peanut butter melting wonderfully with the dark, rich chocolate with that cool, refreshing punch of mint. This does work with regular chocolate (obviously) but the mint chocolate just gives it that extra element. 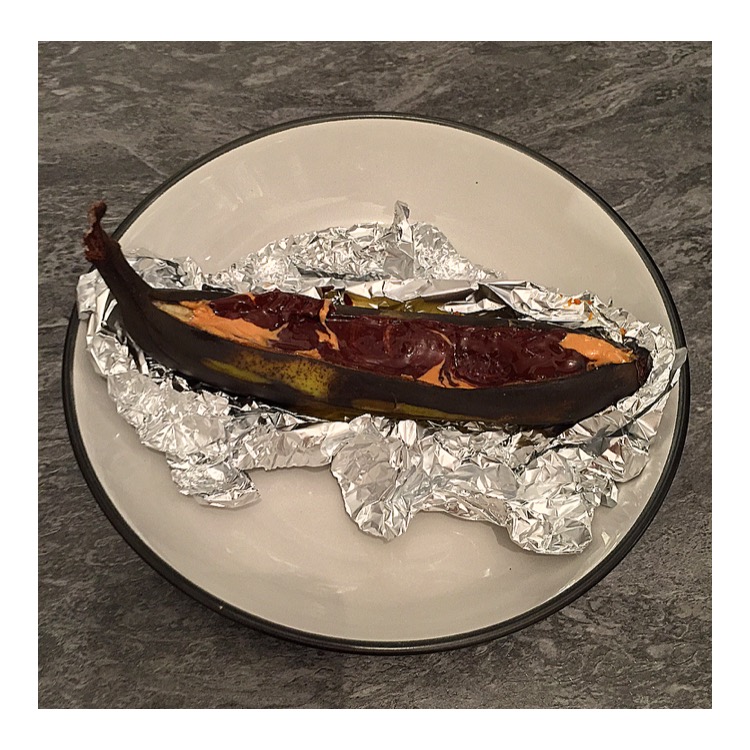 So how you do this is to preheat the oven to 200C. You grab a banana and lightly drag a sharp knife down its skin (the arch of the banana’s back against the counter top, if that helps?). Slightly peel some of the skin back but don’t totally open it.

Gently spread some peanut butter under the open skin of the banana. Grab yourself some mint chocolate and snap up into small pieces and stuff under the skin amongst the peanut butter. Now wrap the banana gently but tightly in some foil before placing in the oven for about 15-20 minutes. Carefully remove from the oven, take off the foil and eat straight from the skin, ensuring your mush together all of the soft, creamy banana into the melted butter and chocolate.