MY WEEK, THROUGH MY MOUTH…

I wanted to describe to you guys how I go about my week in terms of eating. I get a lot of people asking how I eat the way I do and how I find time etc and I think it’s important for you to understand that there is no mystery about what I do and how I do it. So what I’ve done is map out my eating template from Monday-Friday and how I go about using ingredients throughout the week.

I’ve also detailed what I bought and when I bought it to making gliding through the week a little easier. I have to preface this by saying of course, I cook a lot, so a lot of the spices that are mentioned here I already had in the pantry but there’s no spice mentioned here that costs more than 72p in ASDA. I also had a few of the ingredients anyway i.e. sweet potatoes etc but it’s all written out for you.

And you may notice the absence of sweet things. Seldom do I crave sweet treats and it’s usually only on a weekend will I make something sweet.

So here goes. Here’s my week on a plate. 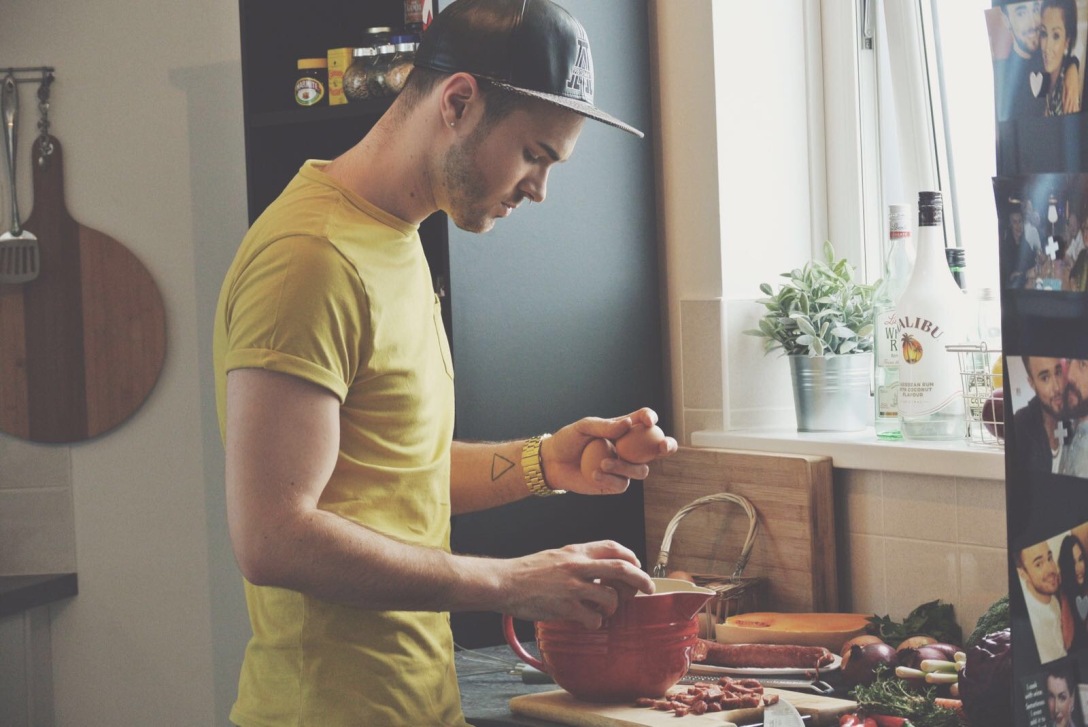 MONDAY
BREAKFAST: Okay so I start my day the way I always do. Granola mixed with some cinnamon, chopped apple, desiccated coconut and natural yoghurt tossed up violently (it’s Monday after all) and eaten at my desk with a big ass coffee.

LUNCH: I always try and take in last night’s leftovers to eat in work but last Sunday I was drunk so there was no cooking so lunch today is a Medium £2.50 salad from Morrisons. Yes.

DINNER: Dinner for the night is Beetroot Gnocchi with Feta & Pistachios. Sounds fancy, but don’t panic. I already had pistachios in the house so if you have mixed nuts or something, just use those. If you don’t have nuts, don’t bother. It’s only for crunch. 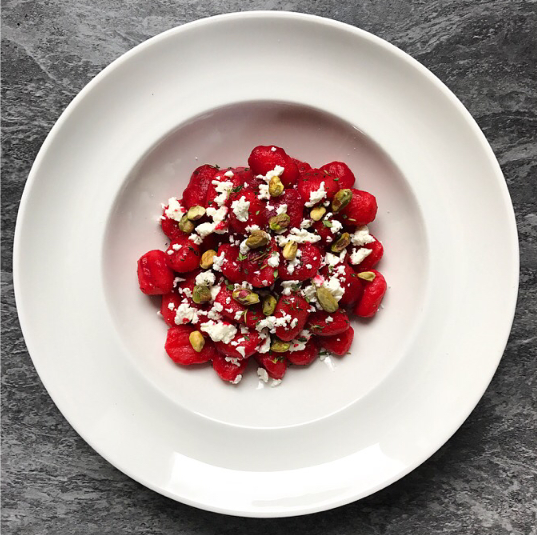 This meal is so simple. All I did was buy some beetroot, feta and gnocchi on my lunch break and the basket total was like £3.60 or something? I put three of the five beetroots from the packet into a blender along with a splash of oil, garlic, salt, a bit of white wine vinegar, thyme and a dribble of water to make a sauce. I heated the sauce up whilst I cooked the gnocchi in salted water. I combined the two, sprinkled over the feta and pistachios. Done.

I saved 2 of the packet beetroots for a dip later in the week and also prepped for Wednesday’s meal by peeling a handful of carrots and put them in a jar with a few splashes of the sherry vinegar and some coriander seeds and shoving it in the fridge. It took all of 5 minutes. 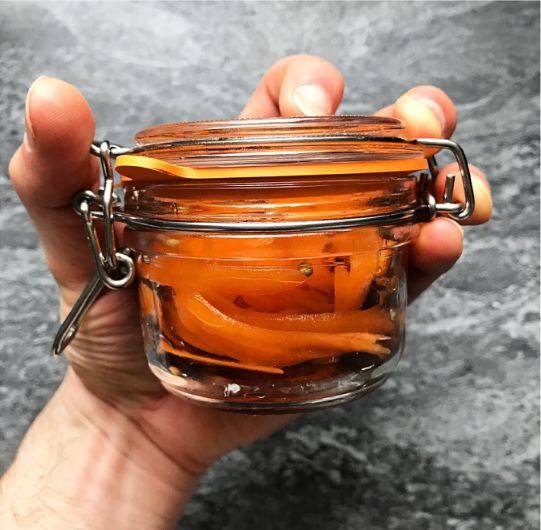 TUESDAY
BREAKFAST: Started off the same. Granola and coffee. Sue me.

SNACK: I succumbed to an 11am snack because Beverly in work shook my world and gave me some shortbread so I had some shortbread biscuits with another big coffee as a snack.

LUNCH: Lunch was leftover gnocchi from the night before and it was good warmed in the microwave but it needed a quick splash of water just to separate all the fluffy gnocchi pieces. I took the cheese in a separate box and threw it on top once it came out of the microwave. I also didn’t have any pistachios left over so I had it without any crunch. It was still fine.

SHOP: On my lunch break I went to the shop and bought a butternut squash, a bag of watercress, two oranges, cherry tomatoes and a bag of carrots. It came to like £4 something.

DINNER: Dinner was a Squash, Sweet Potato & Pinto Bean Traybake. I already had sweet potato and pinto beans in the pantry but if you don’t, use any old canned bean (chickpea would be good?) and swap sweet potatoes for potatoes if you’re struggling. So all I did here was slice up the sweet potato and squash, cover in oil, salt, a little paprika and the zest of one orange. Bake in the oven on 200 for 20 minutes.

Meanwhile, in a big bowl, combine the drained beans and halved cherry tomatoes with salt, oil and some cinnamon. After the 20 minutes, throw these in the pan, shake it up and bake for another 10 minutes. I then served this to a friend along with the watercress and a blob of chutney. 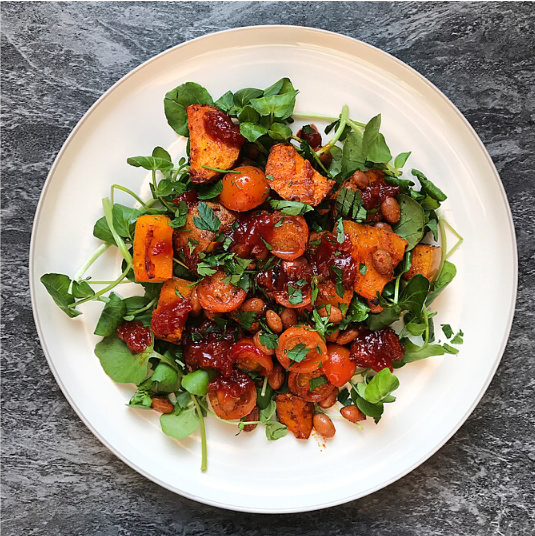 WEDNESDAY
BREAKFAST: I had some porridge which I made quickly before I went to work, which was just porridge oats heated up with some almond milk, maple syrup and a little flaked coconuts and some strawberries that I had in the fridge cut up into it.

SNACK & LUNCH: My 11am snack was actually a bag of like… weird, Mediterranean crisp things that were in work? They were delicious. Lunch was leftover traybake.

DINNER: Dinner was actually eaten out (I ate at Locke & Remedy in the City Centre and I had a goats cheese pizza and it was incredible – I’m so devastated they are closing).

When I got home I made a super quick dip out of the leftover beetroot from Monday by processing it with some thyme, salt and a little natural yoghurt. I chopped up some carrots to take into work to dip for my 11am snack. 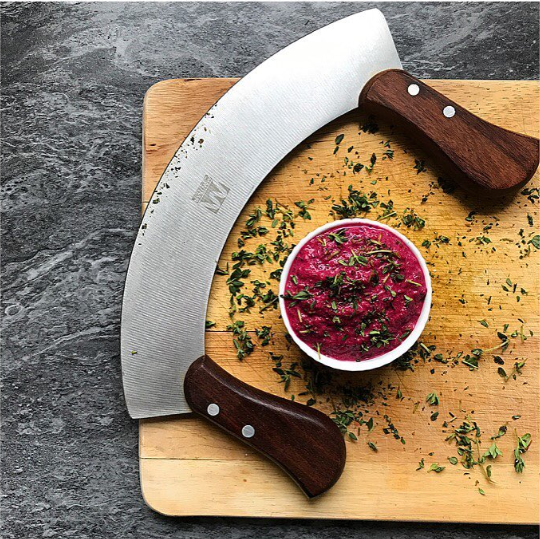 THURSDAY
BREAKFAST: A bowl of cereal before I left for work because the dog was winding me up and I didn’t have time to assemble my usual granola bits.

SNACK: 11am snack was the beetroot dip and the carrot sticks.

LUNCH: I didn’t have food from the night before so lunch today was a vegetarian sushi snack pack I bought from Boots alongside a Ribena and those INCREDIBLE wrinkled Paprika crisps? So good.

DINNER: Dinner was actually a breeze because I prepped the pickled coriander carrots on Monday so all I did was cook some egg noodles and put them to one side. Then in a wok I fried some shallots, ginger, garlic and chilies before adding some mangetout. I then added the eggs noodles before squeezing in the juice of a lime and tossing everything together. I then forked in a few dollops of the pickled carrot and served it up with no stress. Took all of 15 minutes. 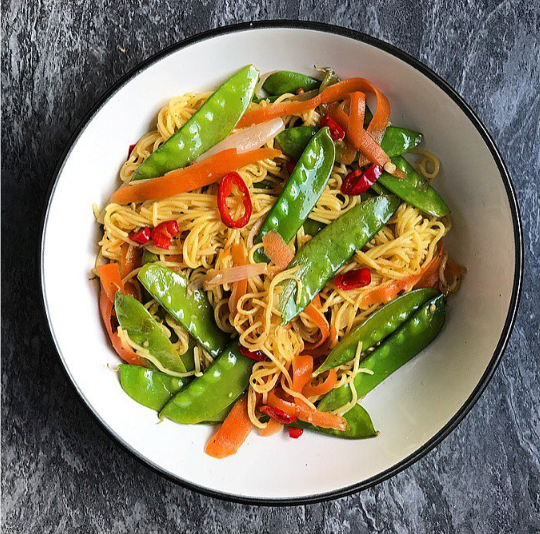 FRIDAY
BREAKFAST: I had some time before I left for work so I scrambled up some eggs and had them with some toast. There was Marmite on the toast, FYI. And the coffee was there. Obviously.

SNACK & LUNCH: My 11am snack was a handful of mixed nuts and lunch was leftover Pickled Carrot & Mangetout Noodles.

DINNER: Dinner was so simple and delicious and used up the carrots and oranges I bought in the week. I cooked some onions in a little oil and salt until the softened before adding a bunch of carrots peeled and roughly chopped. I then added a little turmeric and some coriander. I squeezed in the juice of one of the oranges and cooked for another 5 minutes before adding a litre of vegetable stock. I brought this to a boil and then simmered it for 30 minutes.

I then processed the mix in a processor until it was smooth and creamy before pouring it back into the pan. I added the juice of the second orange before spooning it into bowls. I served it to a friend with a little crème fraiche and a drizzle of chili oil. There was also bread involved for my friend but I didn’t have any. Don’t judge me. 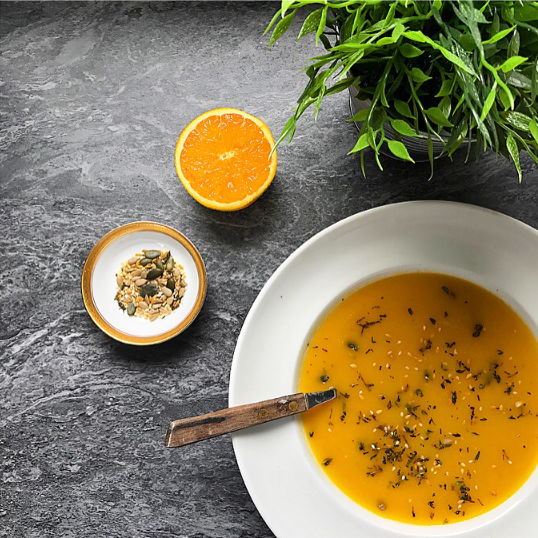 And that was my Monday to Friday! And to summarise, I cooked the following:

And taking out any ingredients I already had, it cost me just about £15 for the week. That’s not including eating out mind and the stuff I already have in the house for breakfast. But still… I utilised every ingredient I had.

Cooking from scratch genuinely is so easy. You just need to get into a rhythm, that’s all. Bearing in mind these things took no time at all to make. I still managed to work a 9-5, have a social life and walk a dog for an hour every day.

Cooking is a mindset. Change yours and you’re halfway there.

3 thoughts on “MY FOOD DIARY”