I got bored of food.

Yes. You read correctly. About a year or so ago I was bored of food.

As somebody that writes about food (or more specifically, the cooking of it), finding yourself in a stale creative space is not ideal. Not at all.

But I found that my entire approach to food was becoming a bit repetitive. Usually I embrace and find comfort in reipitition (Capricorn to the core) but when it comes to my passion and hobby, it’s not a space I find to be productive.

My meals all had a template. I’d start with whatever meat I was craving and then build on it.

Everything was becoming clunky and I found myself looking at the final product and started eating for sustenance only. This is a cardinal sin for cookery writers.

I wasn’t eating for enjoyment or even for hunger, but because I had to.

So a year or so ago I decided to challenge myself to approach food in a brand new way and that was to cut out meat entirely. Cold turkey.

But without the turkey. Just cold tofu.

No, I didn’t do it for The Gram or for attention (I PROMISE!) I did it because I wanted to inject a new life into my approach, challenge myself to tackle food preparation and cooking in an unfamiliar way, hoping this would broaden my initial boundaries and limitations with food.

It was a weird oxymoron because in the confines of restriction I found a new space for creativity.

In that year I not only learned more about my body than I ever had before but I also developed a brand new sense for cooking, like I had suddenly learnt how to see in 3D, because the landscape of food became a lot clearer.

It wasn’t the build-a-block approach to food that I was used to, and I now started seeing meals as a sum of parts as opposed to achieving a final product.

Then I craved chicken wings and it was over.

But what I have now been left with is all the juicy creativity I initially sought. I approach meals – even meat based ones – with the same approach as I did with meatless ones.

I now look to create texture and amplify flavour with every step of the cooking. By dismantling my own imposed cooking system, I have now been able to cook in an exciting way without ever eliminating simplicity.

And despite being a carnivore, I still only eat meat maybe once or twice a week.

This burger has stayed with me.

When I cut out meat for a year, I vowed to master two dishes: a burger and a roast. If I could get two recipes I loved for both of these things, I would be a happy man and the year would be seamless.

I’m proud of this burger recipe because it retains a meatiness I craved when I was vegetarian but never attempted to be a lesser copy of it’s meat equivalent. It is an absolute breeze to make, a joy to eat and tastes incredible.

Smoky, gutsy, earthy and a real clobber you can hold in your fists and bite into.

And no burger – meat or otherwise – can be served without something to dip, pour or slather. I don’t like too many things going on at one time, so this Quick Apricot Mustard Chutney blips away quite calmly on the stove top while the burgers cook in the oven.

Heat some oil in a big frying pan. Sling 250g of mushrooms in a food processor and blitz to rubble. Empty these into the pan. Now blitz up 180g of cooked chestnuts (from a packet). Sling this into the pan to. Now blitz up three or four peeled shallots (or a small white onion) and two garlic cloves. Take out a small handful and put to one side for the chutney – throw the rest in the pan.

Fry the mushroom/chestnut/onion/garlic rubble with some salt until it starts to brown a little. Add a teaspoon of cumin, a teaspoon of paprika, some pepper and a small teaspoon of miso paste (if you’ve got it) and cook for a further 10-15 minutes. Empty this into a bowl and leave to cool.

Once it’s cool, chuck in about 50-60g of breadcrumbs (or flour if you’re desperate) and a handful of finely chopped parsley. Toss everything together so that it makes a clump.

Separate the clump into four balls and throw each ball back and forth from palm to palm so it creates a tight little ball just slightly bigger than a golf ball. Put each ball on a baking sheet (with some baking parchment on it for ease) and gently press down on each ball with your palm to create four meaty burgers (or sliders!). 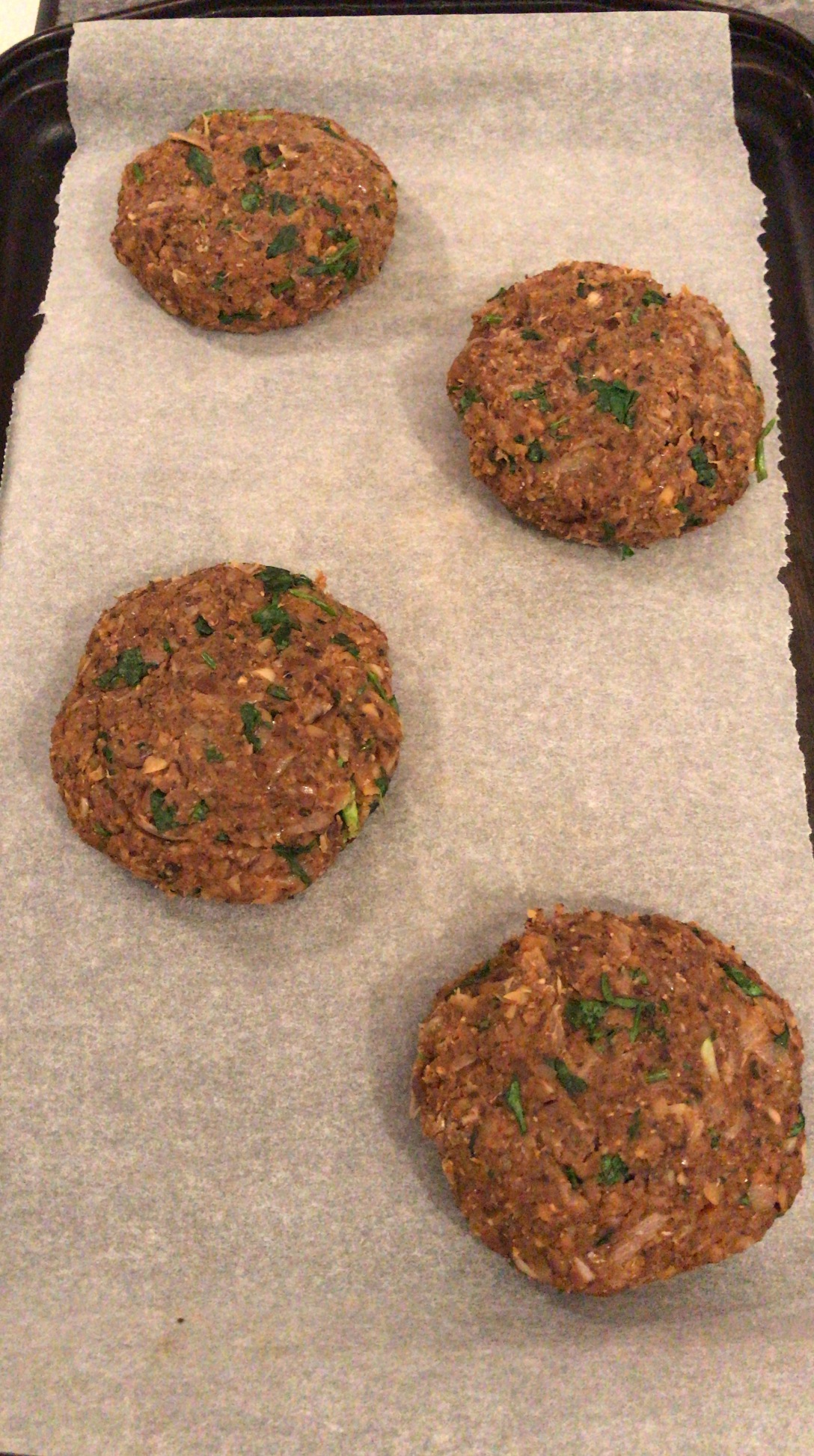 Slide this into your fridge for 15-20 minutes for it to form. In this team, preheat your oven to 200C.

When the oven is preheated, sprinkle each slider with some salt and slide in the oven and bake for 30 minutes.

For this 30 minutes, we can make the chutney!

By the way, if you already have a banging jarred chutney that you love, don’t bother with this part. But do if you love a sweet/spicy accompaniment because this chutney really is banging. It’s also good with curries… just saying. So I urge you to make it without the sliders ANYWAY.

Throw the small handful of blitzed shallots/onions and garlic from earlier into a small saucepan wit some butter and cook 5 minutes with some salt until they start to soften.

Chuck in a handful of chopped dried apricots and fry with the onions until they start to soften.

Mix everything together on a high heat until it starts to bubble then reduce to a simmer.

Keep this simmering away for the rest of the sliders cooking time (which at this point should be 15 minutes).

Once the sliders have roasted take them from the oven and leave to sit for 10 minutes (you can keep the chutney simmering for this time also, just stir now and then)

Serve the sliders either in a bun with some American cheese, lettuce, tomato and a dollop of the chutney or, if you’re feeling a bit more virtuous like I was when I made this, in a wrap.

I had it with some rocket, shredded carrot, avocado, tomatoes and then the chutney dribbled on top.