I’d go to war for a good sandwich.

Remember that episode of Friends? When Joey threw himself on his sandwich to save it from what he thought was gunshot?

And I’d absolutely throw my body on his sandwich. And then do a snow angel in it. This sandwich brings me joy, can’t you tell?

I always contest that hands down, my mother makes the best sandwiches ever. She gets the best bread, slathers it, layers up the sandwich with architectural precision that no sandwich should ever be worthy of, hands it over and then I go to heaven.

Her sandwiches are fridge raids. Mine are a little more calculated.

Not because I cook, not because I enjoy pottering but because I don’t have sandwiches often. It’s almost like too much of a good thing, y’know? So I space my sandwiches out, which means when I have one… I go to TOWN.

I usually enjoy putting some sort of flesh in a sandwich, meat is usually a very good texture in a meat but when I have it jam packed with different flavours and textures, sometimes I’m good with just vegetables… and I mean that.

I had been craving roast courgettes for quite some time. Since getting back from Florence I’ve been sneaking them into my dishes as much as I can, fried more often than not and ran through some pasta. But I had been meaning to roast them for a while because they almost caramelise in the oven, but retain a meaty chew to them so you can get a full whack of their flavour.

But I knew with this meatiness I needed crunch. I very nearly threw the tomatoes in the oven alongside the courgette too but I wanted a little crunch so I kept them raw. So glad I did. Roast tomatoes a quite sweet, so at least with this I kept that tangy freshness to them.

I used baked feta in this because the oven was hot and I wanted smokiness in the sandwich somewhere, but by all means use whatever cheese you want.

And the Miso Mayonnaise? FOOL’S GAME. The fact I hadn’t made this sooner makes me violent. The method is streamlined and effortless to the point of discomfort, but I swear you will be dabbing your finger in and eating it straight from your own skin. I did.

God damn it I can’t recommend this enough. Even if you’re a meat eater to your very soul, you won’t regret this sandwich. Your tastebuds will feel and be thankful for every succulent layer. 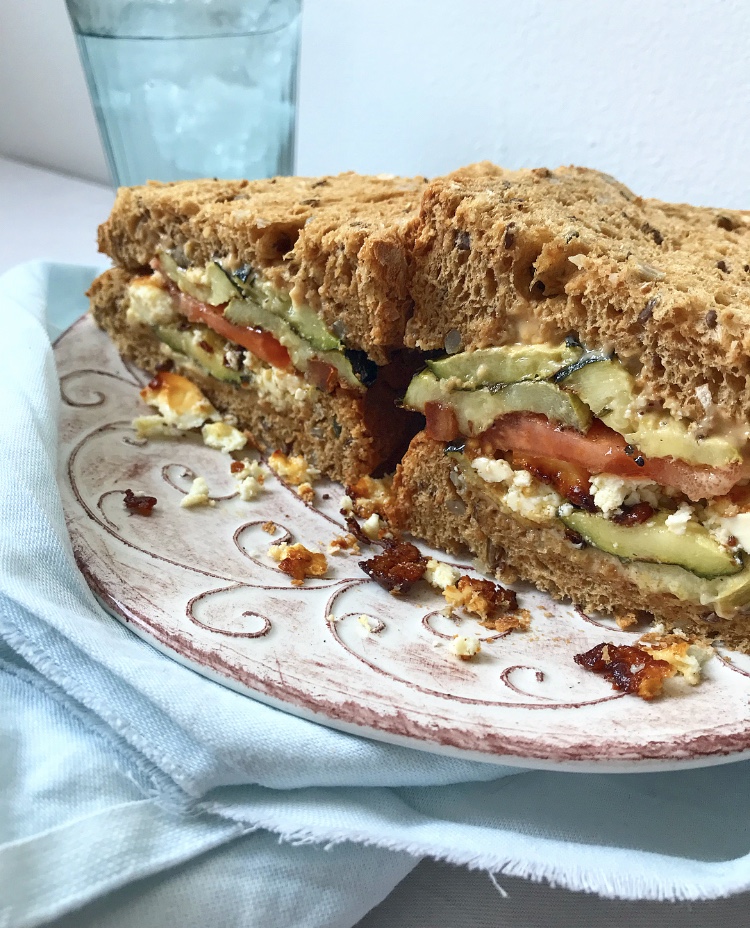 Slice a courgette up into about 6, thick rectangle slices and lay on a roasting tray. Coat them in a little olive oil, sprinkle with salt and pepper and some chopped fresh rosemary and slide in the oven for 35 minutes.

While this roasts, grab a big tomatoes and chop into slices, three thick slices would be perfect.

In a small bowl, add a teaspoon of miso paste and two tablespoons of shop bought mayonnaise. Mix together with a fork.

Grab another baking tray and break up half a block of feta into it. You want a mix of both small bits and big hefty chunks. Drizzle with olive oil, sprinkle with pepper and slide into the oven for the courgette’s last 10 minutes.

Take both out of the oven and leave to cool a little while you toast two pieces of bread.

I had a seeded Low GI cob which I bought from Lidl and thickly cut into slices.

When your bread is slightly toasted – not TOAST just a bit crunchy – get to building.

Spread the Miso Mayo thickly on both (yes both) pieces. Now on one piece, drape three pieces of courgettes.

To this add half of the baked feta.

On top of this layer the 3 slices of tomatoes and add salt and pepper.

Now add the other 3 courgette slices followed by the rest of the baked feta. Squish down the second piece of Miso Mayo’d bread.

Eat and be prepared to throw your body on it if you hear gunshot.