This is my standard banana bread template.

Extra ingredients, enhanced flavours, different liquors – all of these can be toyed with as desired, but the basic template of my banana bread is this recipe. And if you enjoy banana bread, this could quite possible becomes yours too.

Sure the addition of some boozy rum soaked raisins is a little schmoozy for a breakfast slice but don’t we all have random raisins lurking in our cupboards? I always have raisins creeping about my pantry and they do often find themselves plunged into liquor and tossed up in some bread batter. It’s a divine fate, agreed?

I grew up with banana bread. My mother would often will us to leave bananas alone so that they could go a really sketchy black colour so that she could crush them into a batter. Pop to my mothers house on any given Sunday and I’m sure you will find a banana loaf on her Kitchen counter. It’s a routine I have not only become accustomed to (and often leave with a good springy brick of it for myself) but it’s a routine I find myself slowly falling into.

It is a challenge to get bananas into a loaf recipe without the texture turning to mush. Not a hard challenge, but it is a balancing act. Too many bananas and you (TURN INTO A CHIMP) no – the loaf could become quite sludgy and wet which weirdly, loses that sweet banana flavour. Too little banana and it’s gone completely. You may as well just bake a normal regular degular cake.

This cake balances it all. A banana bathed batter that is still architecturally crumbly. It’s everything you want in a loaf, but you get that slight, warming whisper of rum which comes from both the soaked raisins and then the raisin spiked rum soaking liquid. Have faith and read on.

And the Fauxclate Spread confounds me. I was snake charmed into watching a Deliciously Ella video where she made a fake chocolate spread out of dates and milk. I was intrigued. Not because I don’t eat chocolate (oh, please) but because I love dates. But Date Spread sounds gross.

So I had a crack at her recipe and found that I could quite probably do a version that is a bit simpler, cutting out one or two ingredients and still making it taste SUPER chocolatey, despite being LITERALLY milk melted dates and some coco. It charms me. It’s such a delicious spread so if you don’t make it for the flavour, make it for the fact you could eat SO much more of this than ACTUAL chocolate spread.

I was eating it like a yogurt at one point. 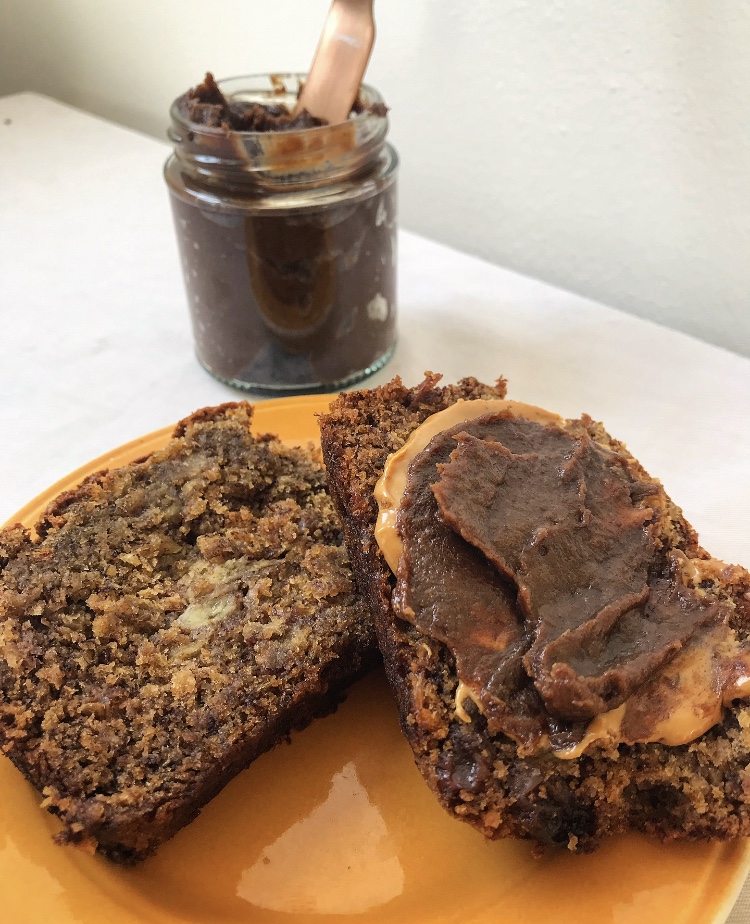 First soak your raisins. Throw 80g of raisins into a bowl and cover with rum. Cover and leave to one side, FYI – they taste REAL good after soaking overnight.

Now make your fake chocolate spread. It’s as simple as this.

Grab a big saucepan and throw in a handful or two of dried, pitted dates. Cover with almond milk and bring to a gentle bubble on a low heat. Keep the milk simmering, stirring regularly so that the dates soften and burst.

Once the dates have begun turning to a sticky (but still loose) goo, add a tablespoon of good coco powder and a little drizzle of maple syrup. Keep stirring until everything comes together into a runny but thick paste. Take off the heat and let settle a little. It will firm up slightly to a spreadable paste.

Try your best not to eat all of this with a spoon. Keep it for later, and a preheat the oven to 180c while you’re at it. And grease/line a loaf tin.

Put 4 overripe bananas (the odd looking ones that go black once left alone for too long) in a bowl and mash into a mush. Throw in 70g of unsalted butter and mix this in. It’ll be lumpy. That’s fine.

Stir in 80g of white caster sugar, 100g of soft brown sugar, a drizzle of vanilla extract and 1 egg until you get a velvety, caramel coloured paste.

Add in 170g of dark rye flour (but you could use normal flour if need be) before throwing in 1 teaspoon of baking powder and a little pinch of salt. Stir everything together.

Finally add in your rum and raisins. Like so. Put a sieve over a jug and pour the raisins – rum and all – into the sieve so the jug catches the rum. Put the raisins back in the empty bowl.

Now add a tablespoon or two of the raisin flavoured rum into the batter and stir everything together. I tend to decant the rest of the rum into a sterilised bottle and keep for when I want to make ice cream… or just have it with some cola!

Pour the rum scented batter into the loaf tin and slip in the oven to bake for about 1 hour and 10/15 minutes until a skewer comes out clean.

Leave to rest in the tin on a cooling rack for about 30 minutes before taking out the loaf and slicing.

Serve with the Fauxclate spread… but also, if you love yourself, with a slick of smooth peanut butter. You will NOT regret it.