I promise you… GENUINELY… the addition of quinoa here has nothing to do with modern cliché.

I mean, I’m a bearded food blogger with a French Bulldog, I do not struggle for modern cliché material. I even have a recipe for Butterbean Blondies, for God sake.

But this recipe is genuinely a product of nothing more than hunger, impatience and a lack of risotto rice.

I had a very short amount of time to make dinner one evening due to a social engagement. I was also glued to the office for the rest of the week, so needed something that would hold up well in some Tupperware to zap in the microwave.

Risotto, with its big S on the chest, was the only answer.

But waiting for risotto rice to cook be damned (plus I didn’t have any) and quinoa cooks in absolutely no time at all. Prayers answered.

Yes, I pureed some peas but as a regular cook, grabbing my hand blender is no hard job, but if this stresses you out – you could always be super convenient and use a tin of mushy peas. I’d never judge a ban of mushy peas. Ever.

In fact my standard chip shop order is chips, battered sausage and mushy peas which you just KNOW comes out of a nuclear coloured can. All the better for it.

Boil a kettle. Once it pops, chuck some frozen peas in a bowl.

Cover the peas with boiling water, cover the bowl with a plate or something and leave them sit. 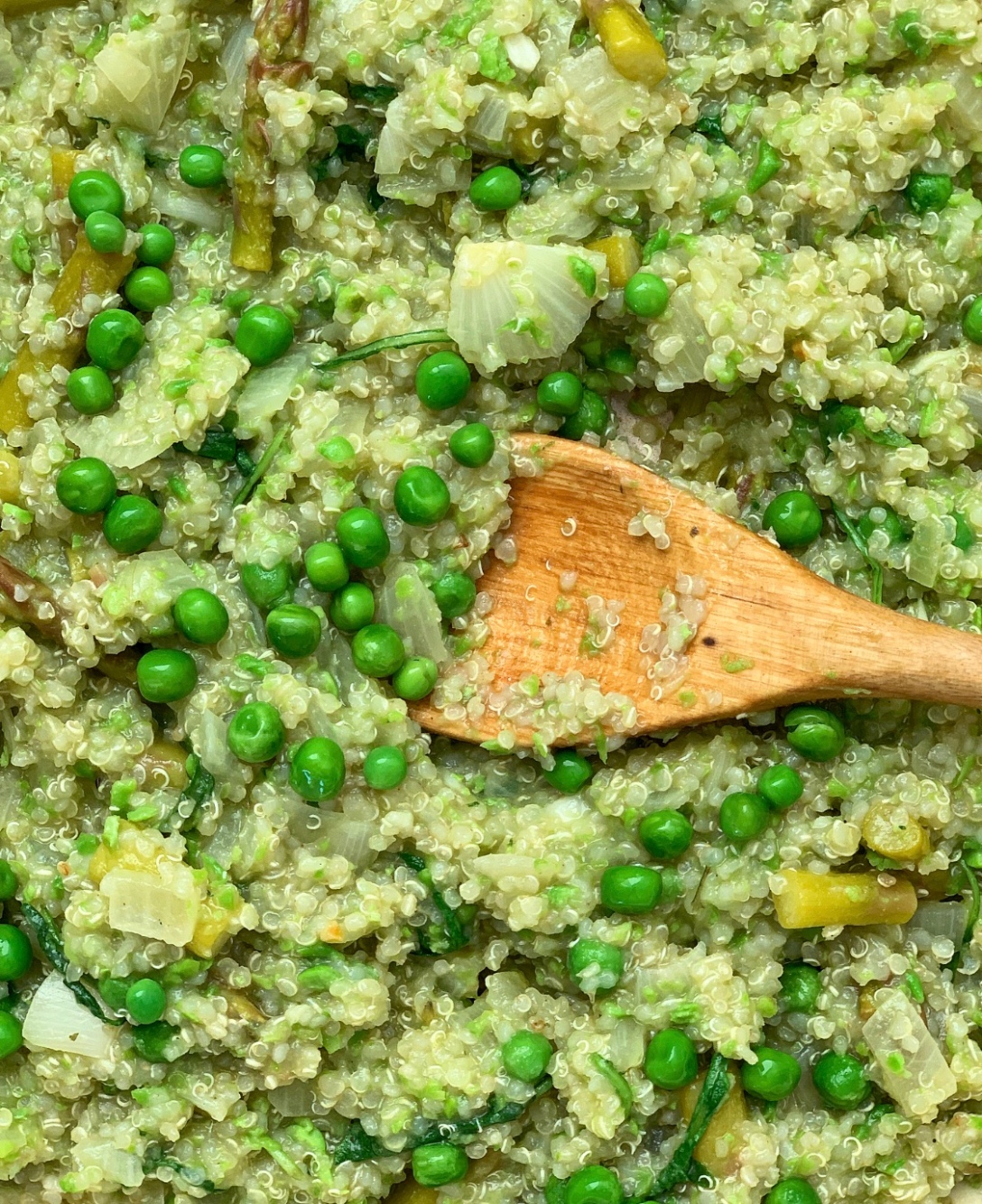 Heat up some oil in your widest frying pan and chop up an onion and two garlic cloves.

Fling them in the hot oil, salt them and cook until they begin to soften.

Chop up a few asparaguses into little chunks and throw into the softened onion and garlic and cook until they begin to soften slightly.

Now empty in some quinoa. I scatter in enough to cover the surface of the pan. Stir the quinoa into the pan so that it begins to gloss up and take on the oniony/garlicky/asparagussy oils.

Pour in a cup of white wine and bring it to a bubble, stirring. Keep stirring until the quinoa starts absorbing the wine. Crumble in a vegetable stock cube and stir to disperse it.

Now cover the quinoa with water from the kettle. Bring it to a boil again, drop to a simmer an continue stirring until the quinoa has absorbed everything.

Quinoa will not take as much time to cook as risotto rice, so you can get away with one more pour from the kettle, stirring until the quinoa absorbs it all. The quinoa will start to expand and the little white grain in each quinoa flake will expand and split.

You’ll know the quinoa is ready when you can drag your spoon through it Moses Tide style and it doesn’t collapse back in on itself.

Now drain your peas, take a small spoonful away to the side. With the rest, using a hand blender, blitz everything to a puree. You don’t NEED to do this step, you could just use all the peas but I like the fresh sweetness dispersed throughout the whole dish.

Stir the green pea puree through the risotto until it takes on the jade creaminess. Add some salt, a generous sprinkle of pepper.

Serve with the reserved peas sprinkled on top. You could also go one extra and sprinkle over some fresh mint and feta, but who cares. Tastes amazing just like this if I’m honest.