I remain true in my belief that there is no bad way to eat chicken. At all.

Roasted with a humble offering of rosemary butter (like this recipe here) or smothered in a hot sauce and eaten by hand (like so), I refuse to slow down or tame my love for chicken in all of it’s forms.

Except a chicken breast. They’re sent straight from the Devil to test us.

Now if you want an authentic Tandoori Chicken recipe, look away but if you want something that is closely inspired by the flavours and approach to a Tandoori recipe, stick around.

A Tandoori is named as such because it is cooked in a tandoor (a clay oven) with wood chips to infuse the flavour of the chicken with a smoky fug.

I however, own no such thing.

So instead I retain the preparation of the dish, which is the marinating of the chicken in a spiced up yogurt. I already have a Curried Yogurt Chicken recipe however this is a fragrant, lemony and cumin spiked number whereas this is a lot warmer, spiced and carries the round, nutty earthiness of turmeric.

I serve it modestly with some boiled rice and some lime wedges but I have to serve it alongside my Coconut Raita and Pickled Peppers.

Yes the peppers add to the heat but the coolness of the raita calms everything down so gently, allowing for a soothing but strangely warming experience. 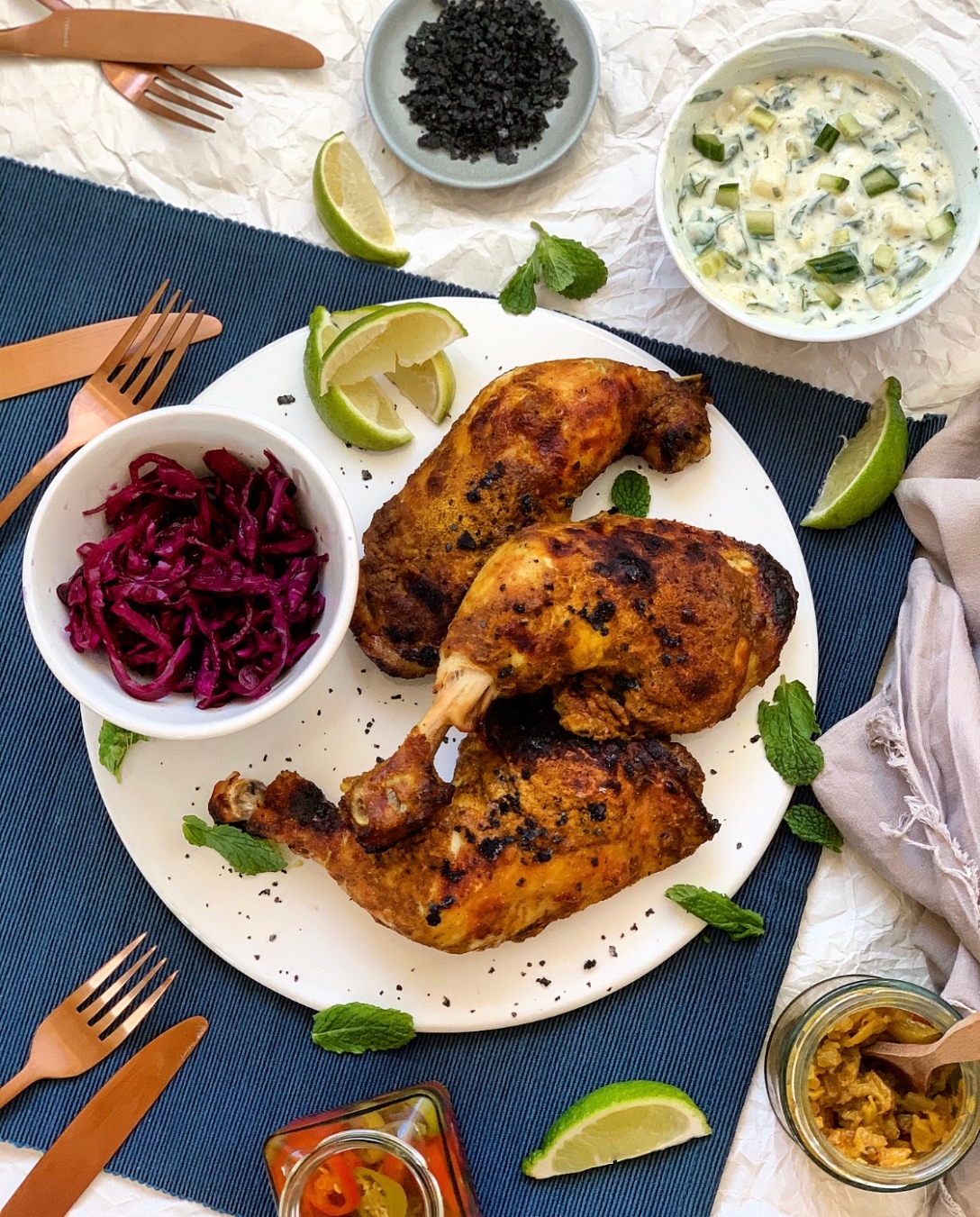 First up you want to marinate your chicken. I take chicken legs but drumsticks would work for this too.

I throw them into a big ziplock sandwich bag and add the following ingredients: 3 minced garlic cloves, a minced thumb sized piece of ginger, a teaspoon of chili powder, a teaspoon of turmeric, two teaspoons of garam masala, some salt and pepper and 250g of full fat natural yogurt.

Zip the bag closed, rub everything together and let the bag sit in the fridge either overnight or on the counter for an hour at least.

When you’re ready to cook, take the chicken out of the fridge to come to room temperature (if it’s in the fridge, that is) and let an oven preheat to 180c.

Take your chicken out of it’s marinade and place on a lined baking tray and slip in the oven for 45 -55 minutes.

While the chicken cooks, make your raita. This is nothing more than a combination of 250g of coconut yogurt, one grated garlic clove, a handful of chopped fresh mint and coriander, the juice of one lemon, half a cucumber chopped up finely, some salt, pepper, a tiny pinch of curry powder and a pinch of desiccated coconut.

For the Peppers, if you’re in a hurry you could just chop up a long, thin chili and put the chunks in a small bowl and cover with a little honey and cider vinegar before you start cooking to let steep but if you have the time, using the pickling liquid from my Pickled Red Cabbage but swap out the cabbage for some chopped chillies.

Serve the chicken with the raita, the peppers, fresh limes and some rice.