I had a plan. I was going to head to the gym. I was then going to put on a load of washing. I was going to walk and feed the dog. Make myself some healthy banana pancakes and a coffee from the stovetop burner.

The day’s desires are just not feasible in December’s reality.

It’s warm, you want to take advantage of every second available in bed in the morning, so the concept of making a good breakfast – let alone go to the damn gym – just seem to melt away along in lieu of the snooze.

So I made a vow to myself I would have a good breakfast ready throughout the week at a moments notice. Henceforth, this recipe.

I have a few recipes granola recipes on this blog (the most popular so far being my Lemon Salt & Orange Peel version) and even though I can’t pick favourites with my muesli based children, I have a soft spot for this one.

This particular variant has an amazing texture to it, with a sharp honeyd lime kick throughout that is enhanced with chunky morsels of sugary but spicy chunks of candied/crystalised ginger. You can get these in bags in Home Bargains.

By all means have your granola as you see fit but as you can tell from this intro, I want mine as quick as possible so I stir mine through yogurt and I be done with the damn thing.

A bit of assembly on a Sunday means countless minutes extra in bed through the week. 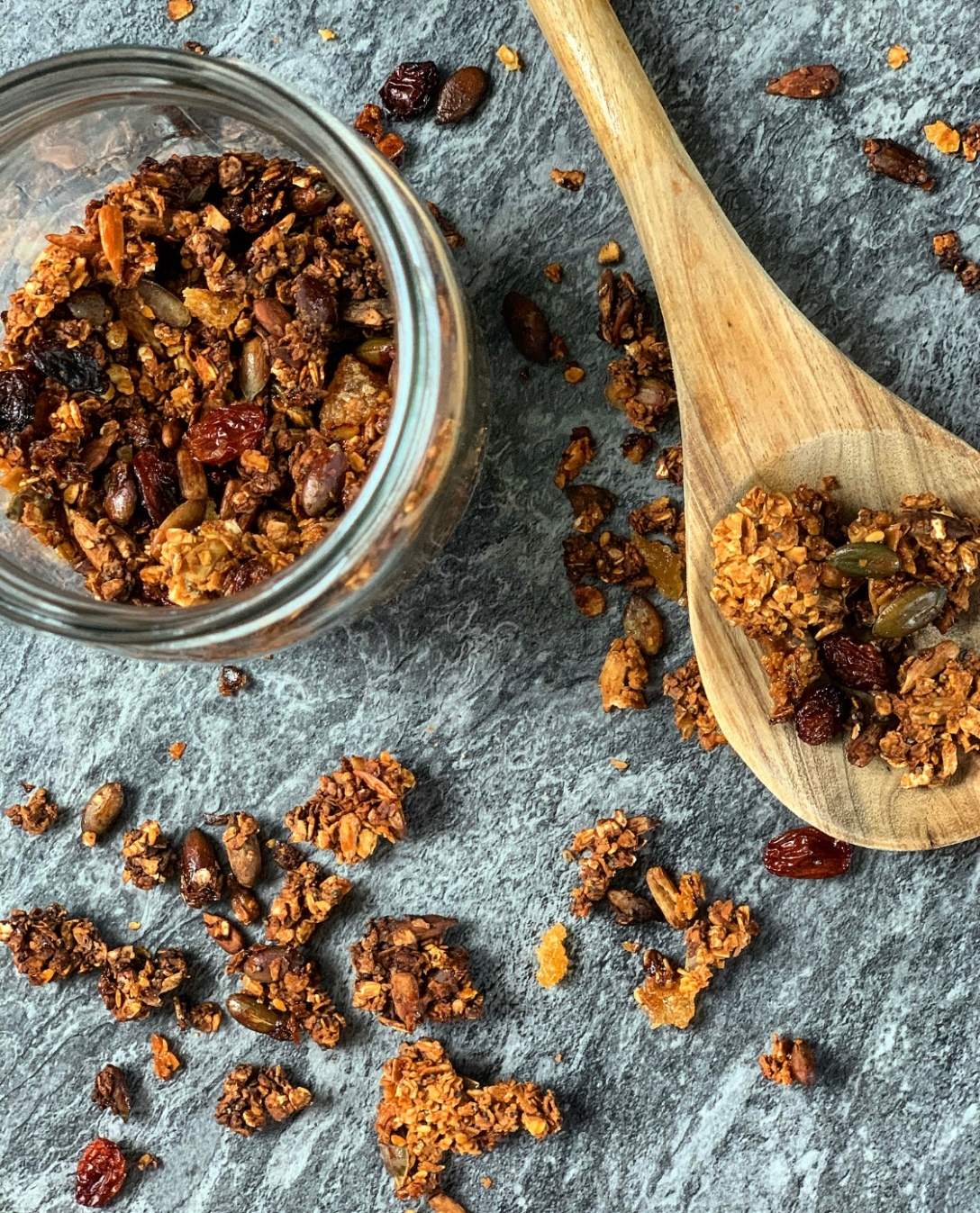 To see how much you need, get yourself two sheet pans and scatter some rolled oats (not instant) onto them until the cover the surface of both pans. I never weigh the oats, I just go by how much my pans can hold.

Now scatter over some sunflower seeds and some pumpkin seeds – roughly 50g of both.

Tip over two teaspoons of cinnamon across both pans (one for each pan) followed by a little dusting of nutmeg.

Now spoon over some honey, I’d say roughly a tablespoon and a half for each pan.

Get yourself two limes and zest both into a saucer – you need the zest later and the juice now. Squeeze one lime into each tray and carefully with a spoon, mix everything together.

Now I’ve suggested a spoon here, but I’m a pig and get my hands in. Once everything is mixed together, put the trays in the oven for 15 minutes.

In this time, get yourself a handful of crystalised/candied ginger and chop it into toothy mouthfuls.

Also get yourself some golden sultanas ready.

After the 15 minutes, take the trays out of the oven, scatter over the ginger and currants and slip back in the oven for a further 5 minutes, keeping your eyes on it so that it doesn’t brown too much.

After this time, take your trays out of the oven, sprinkle over the lime zest and let them cool before you break up the granola with some kind of utensil.

Spoon the granola into a container of your choice and enjoy the extra minutes in bed.