Like an appreciation for early nights and not being able to get out of a chair without groaning, bread baking came to me a little later in life. And thank God it did.

I never want to give unnecessary steps to my readers because I never want to waste your time, energy, or money but there are some things in life that really are wonderful when they are homemade. This is for two reasons: primarily, the taste. A homemade loaf of bread will always taste better than anything made in a factory. Secondly, it does feel like like a small accomplishment. Not the planting a flag on the moon kind of accomplishment, but a small pat on one’s own back for actually doing something that at first may seem complicated.

Because the beauty of bread making is that… it genuinely is not complicated. People often confuse things that take a long time with things that are complicated, and the two are absolutely divorced concepts. Bread baking is not had but there are a couple of mandatory steps, and there is a bit of waiting around in the middle.

And I get it, if you want bread quickly, I mean… Lidl is right there… and that bakery will save your life sometimes… however, when the rain comes down and the dog refuses to walk, I get idle hands. And if it’s a decision between cleaning the bathroom or baking something, I will don an apron. I sure will.

I think the kneading is where people get the ‘can’t be arsedness’ of it all. You need to go for 10 minutes at least – 15 if you can – because this is what develops the gluten in the bread, stretching it out, and this is what you need to give a rise to the loaf because the proteins will lock air into the dough which then reacts to the heat and gives a nice rise. The thought of kneading puts people off, but for me, I set a timer for 10 minutes, line up a few of my favourite songs in a playlist back to back and get cracking.

This particular loaf was a scrambling of ideas and something I really wanted to share with you so that you could have a go at making bread without the nervousness. Flavour wise, yes it’s a wholemeal loaf. Not just because I had the bag and needed to use it up, but I’m finding that the nutty, earthy flavour of wholemeal is something I tend to crave in these turbulent weathers. It’s more warming. The beer gives a maltiness to the loaf which is sometimes missing with plastic white loaves, but I didn’t want to be eating a foam textured pint, so the addition of honey gives a sweet mellowness to slice.

Now this won’t produce a loaf of bread that is perfect for sandwiches, or delicate afternoon tea stuff. It’s a dense, fudgy loaf that needs to be enjoyed warm with nothing more than a lick of butter and a then a crunch of salt on top. 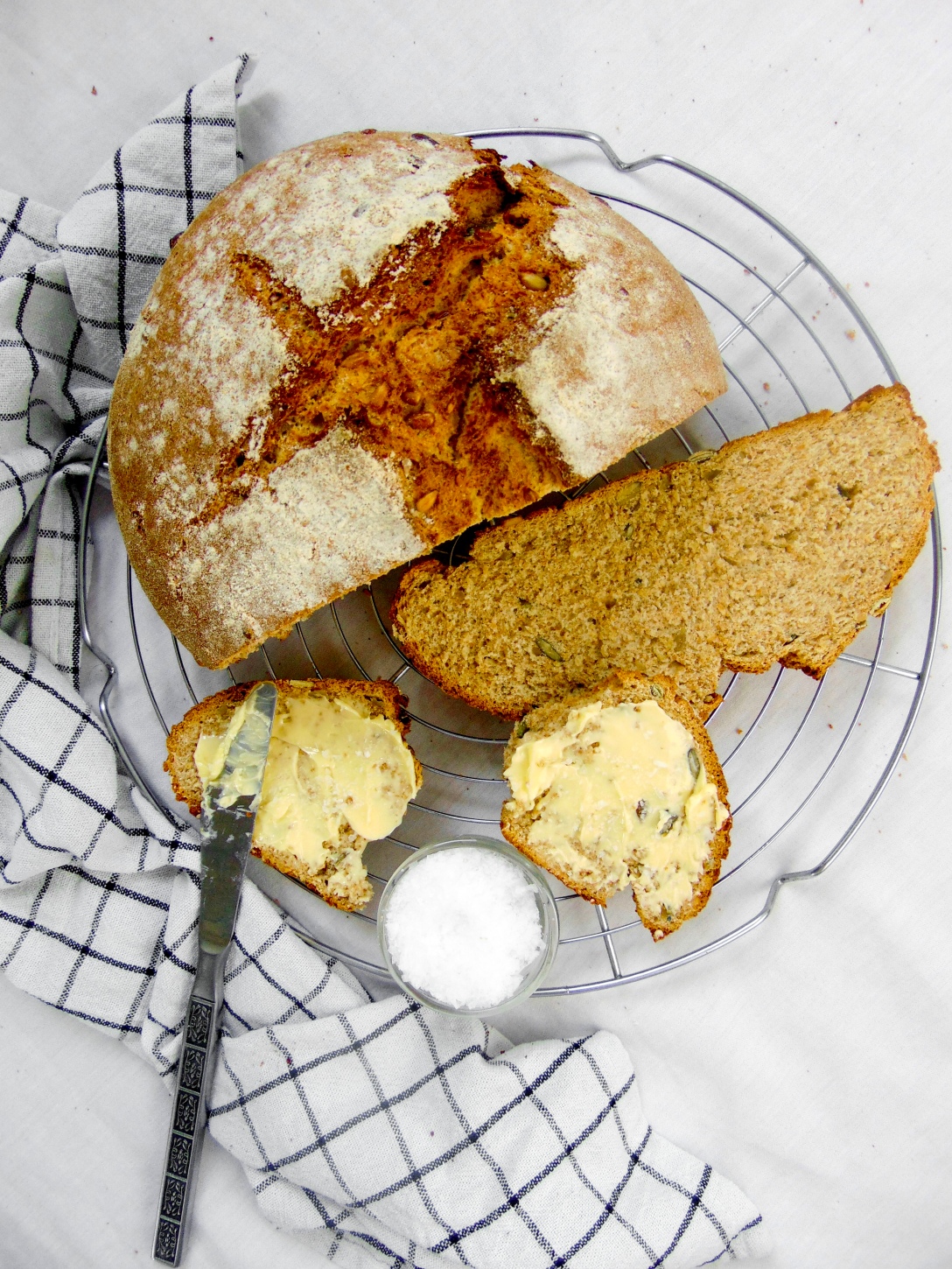 330ml beer – any light-coloured beer will do

100g plain flour plus an extra sprinkle just before baking

A few tablespoons of oil for kneading

100g mixed seeds – pumpkin, sunflower, sesame… literally just whatever is in the mixed bag at the shop