The only thing people lose on a diet is their will to live. I am by no means a healthy person and thank God. I have too much enjoyment for food and a passion for cooking to give a deep fried damn about a calorie count, but what I do have is a relative grip on the truth. It’s a truth that I think a lot of dieters know to be true, but don’t want to admit.

Weight loss clubs are a waste of time.

Nobody should be paying money to have somebody tell them to eat less and move more. It’s biology 101. It’s common sense, actually. And believe me, this is not coming from a health nut. I hate exercise. I hate healthy food. I hate the gym. I hate moving. In fact I have put on my necessary Christmas lbs and could not be happier. I have no interest whatsoever in building muscle or shaping my body, I just need enough movement in a week to accommodate the amount of nonsense I eat. It’s very simple logic. Why people pay money to be told this bamboozles me.

Any diet that focuses on what one shouldn’t eat in lieu of what they should eat is basically a low-key form of eating disorder. If a diet is telling you what you shouldn’t be eating then it is not giving the most attention to where it is needed – and that is on what foods you should be eating to nourish and replenish. Eating a low calorie meal now and then, saying no to a biscuit and crossing your fingers is not going to shift lbs and shame on anyone that is telling you this.

I’ve been to one of these nonsense clubs during the ignorance of the youth. People stepping on scales and celebrating what they didn’t eat publicly (ignoring what they did eat privately) and all giving each other rounds of applause to congratulate ‘steps in the right direction’. Yet not once was an applause given to exercise. Not once. Not once did somebody say ‘I had 2 biscuits but it’s okay, I went on the treadmill for 30 minutes’.

So what exactly does a weight loss club do that can’t be broken down to ‘eat food. move more’. Does it tell you what food is good for you and what food is bad for you? Well Google is free 24/7 and can answer that for you. Does it give you healthy recipe ideas? Google is also only a tap of a button away.

Seeing people’s experiences in weight loss clubs breaks my heart. I see people with some ‘speed foods’ spread out next to a slice of wafer ham. I see plain yoghurts and a single berry for breakfast. I see boiled rice, water and a prayer. I see syns. I see on plans and off plans and don’t know what happened to the plans. My admiration goes out to anybody that is trying –  please don’t confuse this blog post as mocking as I think there is nothing more inspirational than somebody who says ‘I am going to change my eating habits and take up exercise to lose weight’. I encourage this. I admire this. But losing 00.5lbs a week for 6 years is the wrong way to do it especially when you are paying for the privilege.

I think people should have a real, honest conversation about their food intake. Like I said, a dietician or a fitness-food-addict I most certainly am not, but there is a way to incorporate great, healthy foods into your weekly routine that takes a second to make an even less time to consume. On the flip side, there’s also foods that are not exactly considered ‘health foods’, but are perfectly acceptable to eat on the basis that it is not done in excess and is moderated with exercise. Stop punishing yourselves.

But alas, I understand that some of you may bombard me with before and afters and stats and all the hex b nonsense that you’ve been brainwashed with, so this is why I offer this recipe to you as a peace offering. This is a very low fat, meat free and filling meal that I guarantee will not send you spiralling off plan, but is still extremely tasty in the process of losing weight. It’s a cauliflower based curry that has all the warm and smoky spices you look for in a normal curry, except it uses rich vegetable in lieu of meat and coconut milk so that you won’t feel remotely sinful. 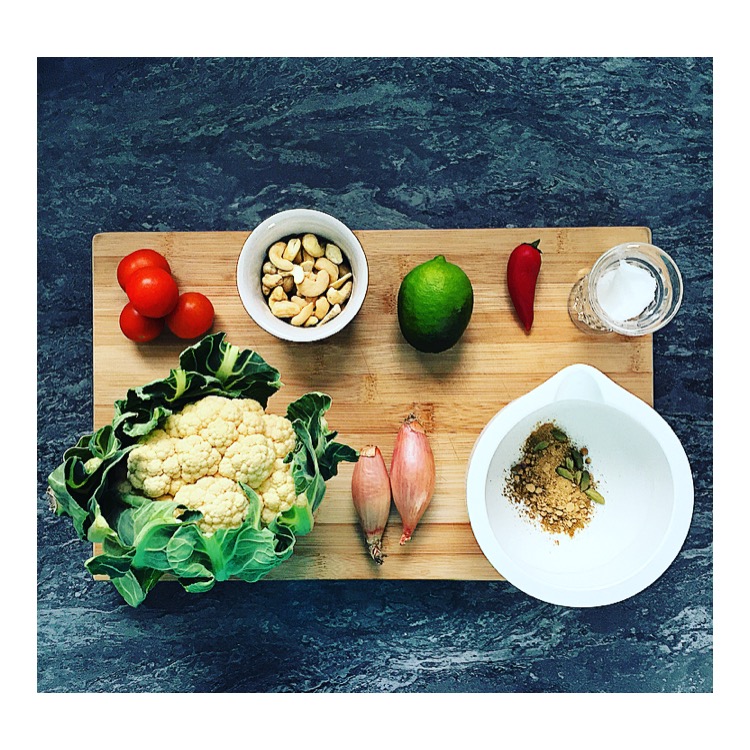 Break a head of cauliflower into smaller florets and leave a small handful to one side. Place the remaining cauliflower in a pan of cold water and bring to a boil. Drop the water to a simmer and allow to bubble gently just over 5 minutes before draining and rinsing with cold water in order to stop the cooking process. Leave to one side to cool.

In a pestle and mortar, add a pinch of cumin, a pinch of ginger, a pinch of turmeric and a small pinch of garam masala. Split open some cardamom pods and tip the little black seeds into spice mixture. Now grind everything up into an amazingly rich and fragrant curry powder and leave to one side. Heat a dry pan on the hob and tumble in some cashew nuts, dry frying them until they colour before leaving to one side to cool.

In a wide frying pan with a lid, melt a little coconut oil before adding some roughly chopped shallots. Bearing in mind, this is me being fancy, if you just want to use some oil and a normal onion, please feel free. Add a little salt to the shallot to prevent it from burning before adding a finely chopped chili. Grate over the zest of one lime and tip in ¾ of the spice mixture and turn everything with a spoon to ensure that the shallots are coated in the fragrant lime zest.

Now add the blanched (which basically just means cooked and then shoved under cold water) cauliflower to the spicy onion mix and ensure everything is coated. Cut a handful of tomatoes into quarters before adding to the pan. Give everything a final mix before clamping on the lid and turning the heat down slightly. Placing a lid on with allow everything in the pan to steam – this will split open all of the tomatoes and extracts it’s juices so that the curry becomes a soft one as opposed to a dry curry, that you tend to get when there’s no animal fat.

After roughly 15 minutes, remove the lid and toss in the toasted cashew nuts along with the last ¼ of the spice mix and cook for a further 10 minutes with the lid off. The curry is now done and can be served with some boiled rice and a little dusting of fresh coriander on top however if I am feeling very virtuous and am in the mood for health, health and nothing but health, I serve this with some cauliflower rice that is made from some of the cauliflower put to one side earlier.

This nutty, spicy curry is not just confined to diets and those who try their best to monitor their food. This can be cooked as an evening meal for anybody (especially vegetarians!) who just want something simple, delicious and extremely nourishing of an evening. You could even add some potatoes to the mix, as I have done in the past, or even use the same template and substitute the cauliflower for some chicken.

The only thing I ask is that you don’t ask or tell me me how many Weight Watchers points or Slimming World syns are in it though.

Like I said – eat food. Move more. There. That’s all you need to know. Hopefully I just saved you some money.